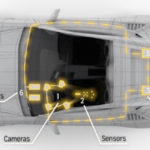 A milestone in autonomous vehicle adoption was recently reached in Nevada, when the state presented the first restricted autonomous vehicle driver’s license to Sam Schmidt. Schmidt is a former Indy racecar driver who was paralyzed in a crash in 2000, rendering him a quadriplegic.

The license pairs with a specially designed semi-autonomous motorcar (SAM) developed by Arrow Electronics. The car is a modified 2014 Corvette C7 Stingray equipped with specialized control systems that allow Schmidt to drive.

A Car Engineered for a Quadriplegic

SAM doesn’t just allow Schmidt to drive on normal roadways – the vehicle can be safely operated under racetrack conditions (by a qualified driver). Moreover, the car is entirely controlled using nothing more than head and mouth movements. While Arrow designed the SAM car specifically for Schmidt, one of its objectives is to pave the way toward similar vehicles for other drivers with physical disabilities.

Here’s how it works:

Getting Back on the Racetrack

The SAM car has allowed Schmidt to get back to doing what he loves: racing. He recently reached 245 km/h (152 mph) with the car during a demonstration at the Indianapolis 500, and has also navigated hairpin turns at the Pikes Peak International Hill Climb. And now, with his new driver’s license, Schmidt is able to take the SAM car out on public Nevada roads.

“It’s been a privilege to work with the forward-looking officials in my home state of Nevada and with the great engineering team at Arrow Electronics to safely and responsibly advance autonomous vehicle technology,” said Schmidt. “I can’t even begin to explain just how much this provisional driver’s license, and the mobility and independence it represents, mean to me.”

For another example of how engineers are helping those with disabilities, read about a Star-Wars-Inspired prosthetic arm that recently entered the market.