Focus on your ability and not your disability, says Justin Vijay Jesudas 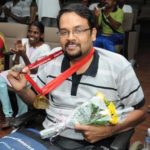 “All things are difficult before becoming easy,” says Justin Vijay Jesudas. After a car accident left him paralysed from below the neck in 2009, Tiruchi-born Justin is a vocal advocate for rehabilitation of the disabled.

The trick, says Justin, 36, is to focus on one’s ability, rather than disability. He himself balances a career as a software professional in Chennai with a nascent vocation in Paralympic swimming and rifle shooting. He even indulges his passion for long drives with the help of a customised car.

“We don’t push people with disability, because we don’t expect much from them. Unless we start doing that, they are not going to do more. And they will continue to be a burden on society,” says Justin.

He shared his views with MetroPlus through a series of WhatsApp voice notes. Excerpts:

Tell us about your life after spinal cord injury and the lessons it taught you.

I was paralysed neck downwards after a car accident in 2009. What’s functioning in my body are my shoulders, which are completely intact; elbows are partially fine, but the triceps in both arms don’t work. My wrist is moderately all right, but none of the fingers function. From below the neck, my entire body up to the toe is paralysed.

The impact depends on where the injury occurs, because the area below it will be paralysed.

As to the lessons I learned, for the first one and a half years, it was the urge to walk again. People seldom realise that a spinal cord injury does not have treatment. What they claim about stem cells is all a scam.

You have to move on with your life. Initially, my family was a great support. I am indebted forever to my parents, wife and my brothers and their family. They were the hands and legs I couldn’t be.

But then, I started wondering why I was focusing on something that I couldn’t control.

I realised that my family was living my life as well. Instead of focusing on their life, they were spending time on trying to make me comfortable.

That pushed me towards independence. I began to exercise my shoulders, what was left of my elbows and wrist to strengthen them.

The first years were not great, as I was completely dependent on others. But ever since I decided to push myself, life’s been wonderful. And I know there’s a beautiful life even after paralysis.

How mature is the medical and general response to the differently-abled in our midst, as compared to other countries?

As far as spinal cord injury goes, there are only 2 proper fully equipped rehabilitation centres in India.

We may be great in fixing the injury – doing the right surgery and getting the right medication. But after that, the rehabilitation is not complete. Reintegrating the differently-abled back into society is a big miss.

Society idolises a person who is existing with a disability. That is more like patronising.

Why not expect more from people with disabilities?

We don’t push people with disability because we don’t expect much from them. Unless we start doing that, they are not going to do more. And they will continue to be a burden on society.

As long as society breaks down all the infrastructural barriers, and makes transport and financial services acccessible to the disabled, we can do a lot for ourselves. We don’t need sympathy or subsidies from anybody.

Tell us about your tryst with swimming, as a sport and a hobby.

I started swimming in February 2014, mainly because I needed cardio-vascular activity. I still remember the my first day at the swimming pool. Deep down, I was wondering how I was going to manage it, because everything below my neck is not only paralysed, but also deadweight.

The lifeguards were very apprehensive, but they gave me a floater. However, I was not able to do much with it, so I took it off and told the lifeguards to hang around, just in case.

I told myself that if I was able to hold my breath, I should be able to float. And I was floating! I started swimming very awkwardly. I can do only backstrokes because I don’t have trunk control.

In a day or two, I thought to myself, ‘why not do this at a very competitive level?’ I started looking at the times that the professional swimmers with disability like mine, were doing. It was at a different level than what I was doing.

Until then, I had used the corner lanes of the pools so that I could hold the wall or the ladder if anything happened.

So I started swimming in the centre lane, because I wasn’t disturbed by anyone. That was when I heard about the State Paralympic Swimming Championships.

In July 2014, I participated in them and won 4 gold medals. I noticed that people who had fewer disabilities than me were swimming much slower. So I thought I had some potential and started training seriously.

I started practicing for the National Paralympic Swimming Championship that were held in Indore, in November 2014. There were no coaches as such, because they didn’t know how to train a person with paralysis.

The other fact was that at that time I was nearly 34 and nobody thought I was a good prospect. I used YouTube and researched what was really efficient in terms of a backstroke for a person like me. I went to the Nationals, and won 3 golds there, with timings faster than those in the next level.

I later realised that the timing in the Nationals was lesser than the minimum qualifying score for all the international championships.

So I decided to compete in international events. My first one was in Toronto, Canada, in January 2015. I won 3 gold medals there. And the timing that I clocked in Toronto was good enough for the World Championship, in Glasgow, Scotland, in July, 2015.

I represented India and finished in the top 15.

So that’s how my career as a swimmer has taken shape. I still practice, and do roughly 2 km training every day.

How do you stay motivated? What should care-givers know when they have a newly disabled person in their charge?

I set up goals for myself. And to reach there, I set up a smaller set of goals. But a goal without a plan is only a wish.

When I keep focusing on these things, I get closer to what I want in life. When I keep myself busy, I don’t get time to think ‘why me?’ Before my accident, everything was going great. And I never asked ‘why me?’ then. So I said to myself that self-pity is not going to help. I started focusing on what should be done next.

With effort, even a paralysed person like me can fully manage his life without care-givers, (though I needed them initially).

Care-givers should push their disabled charges away from their convenient lives. Don’t make them overly dependent. Everyone should pursue independence.

My swimming journey is going to continue. This year I participated in the State championships and qualified for the Nationals. I look forward to representing India in the 2018 Asian Games, and yes, to build it up to 2020 to the Tokyo Paralympics.

Before my accident, in school and college, I used to be a competitive rifle shooter. Recently there’s been traction in the para-shooting event in India. The Rifle Association of India has started including shooters with disabilities in competitions. I did my State and South Zone and qualified for the Nationals as well.

I want to pursue both these sports along with every other aspect of my life.I’ll be seeking adventure, spending time with family, going on long drives … what’s most important is to live a happy, colourful and full life, and a physical disability should not be an obstacle to that.

Experimental Drug Being Tested at Shepherd Center May Improve Mobility after...