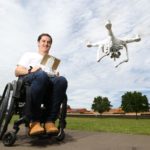 CHARLES Brice always planned on a career above the clouds — he just imagined it would involve flying planes, not drones.

Mr Brice, 26, was training to become a professional pilot before a motorbike crash in 2010 shattered his spinal cord, leaving him a quadriplegic.

But six years on, the St Morris resident is again taking to the skies, launching a business that uses drones to shoot photos and videos.

Mr Brice has made videos for Scotch College and shot footage for real estates agents in SA’s south east.

“I took my drone up to Byron Bay in May this year and took some photos and I thought ‘I quite like these … they would look good hanging on a wall’,” Mr Brice says of the origins of Quad Aerial Services.

“I figured it was a good way to make money and, coming from a background in aviation, it was a way to keep my hand in the game.”

The Eastern Courier Messenger has profiled Mr Brice as part of News Corp SA’s I Choose SA campaign, which aims to shine a light on local businesses.

Raised in Naracoorte, Mr Brice started flight classes at 15 and was flying solo a year later.

“It was the career path I was going down,” he said. “I had no plan B. But things changed, I guess.”

Mr Brice, then 20, was riding motorbikes with friends outside Loxton when he crashed rounding a corner.

Having shattered his C5 and C6 vertebrae, he was flown to the Royal Adelaide Hospital.

He spent 52 days in intensive care, a further three weeks in a spinal unit before a 14-month stint at Hampstead Rehabilitation Centre.

“I remember, the thing that I wanted out of my rehab the most was to be in a manual chair rather than an electric chair,” he said.

“You just want as much independence as possible … you want that freedom.”

Since the accident, Mr Brice has started a journalism degree, travelled to Bali to play wheelchair rugby, co-piloted planes and, now, launched a business.

“I do not worry about things that I cannot control.

“Whatever I get back (in terms of movement) is a blessing, but I do not lose sleep over what does not happen.”

Facebook
Twitter
Email
Mix
Digg
Previous articleFocus on your ability and not your disability, says Justin Vijay Jesudas
Next articleNo barrier is unbreakable! By Tamara Mena