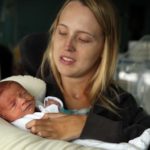 BABY Reagan stretches his hands as he lies on a pillow on his mother’s lap.

Nicole Crawford gently kisses his fingers, wondrous at the miracle that is his birth. She can only feel and touch him with her kisses.

She wishes she could hold her newborn baby in her arms, but as a quadriplegic she cannot.

Ever since she was a little girl, Ms Crawford dreamt of being a mum one day, but at age 18, a car accident robbed her of any chance of a ­normal life.

Ms Crawford was a passenger in the back seat of a 4WD soft top when the male driver “being silly” nose-dived off a sand dune at Kurnell, in Sydney’s south, and flipped the car. Ms Crawford broke her neck.

With no movement below her neck, the now 26-year-old is confined to a wheelchair for the rest of her life.

She also had to give up on her dream of becoming an early childcare teacher. She never gave up on motherhood. Ms Crawford’s wish came true when she gave birth to baby Reagan Avery Crawford on November 9, weighing 2.26kg.

“It’s just a miracle, I didn’t think it would ever come true but he is perfect in every way,” she said.

Without a partner, Ms Crawford considered the implications of going it alone four years ago through IVF and donor sperm. She asked herself if she could manage a baby?

“There is no reason she should be denied having a baby.”

“I talked to mum and said if I wanted a child would she support me ­because she would have to give up her job to help if I did,” she said.

“I was 100 per cent behind her if she wanted to fulfil her dream of being a mother,” her mum, Sandra Crawford, 53, said.

So much so, the insurance broker has taken a year off work without pay to help, and she couldn’t be happier.

“He is very much loved,” the proud nanna said.

With a mother, a grandmother and two great aunties at the family home, baby Reagan is set to be doted upon.

“Both of my sisters live with me (as well as Nicole) so when she decided this is what she wanted, we were all ­behind her because she has lost everything else in her life, why should this be taken from her as well?,” she said.

“She is completely immobile but she is a very healthy quadriplegic. It’s very rare, she is my third (quadriplegic mother) in 15 years. We had to look at the social issues, who will feed the baby, look after the baby etc but she had a very clear family support network who were very well organised,” Dr Bowyer said.

Because Ms Crawford, from Picton in Sydney’s southwest, cannot care for herself, IVF Australia took her case to their ethics committee before agreeing to treat her.

“They … found there was no reason why not because she has such a good support network and she is a 26-year-old woman and there is no reason she should be denied having a baby,” the excited Nanna said.

“I was a little bit shocked, then ecstatic, then overwhelmed, then over the moon,” she said.

“She did very well during the pregnancy until 27 weeks when she got viral pneumonia which is much more serious in quadriplegics,” Dr Bowyer said.

“She was admitted to hospital to be ventilated, and then she got better.”

“I won’t be able to do everything like a normal able-bodied parent but we will work it out and do the best we can,” she said.