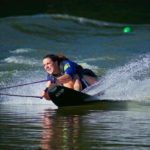 Jesi Stracham used to captivate biotech investors and inadvertently move markets with social media posts documenting her dogged quest to get out of her wheelchair and back onto her feet.

These days, the energetic 24-year-old North Carolina resident goes online to tell a different story. Many of her Facebook and Instagram posts show her competing in off-road vehicle races, an adaptive water skiing competition, and a pageant for women with disabilities.

It’s been nearly two years since Stracham became just the second spinal cord injury patient to get a tiny experimental device implanted in her back, soon after a motorcycle accident left her paralyzed from the chest down. The “neuro-spinal scaffold” is designed to improve recovery from paralysis by providing support for spared nerve cells in the first weeks after an injury, before it dissolves.

When STAT told Stracham’s story in 2015, her relentlessly upbeat social media posts — “I moved my leg on my own!” she wrote on her GoFundMe page — suggested it might be working as Stracham and manufacturer InVivo Therapeutics hoped. But her last official checkup nearly a year ago determined that her body remained stubbornly stuck at the same place — the most severe level of paralysis — on the five-point scale used to classify spinal cord injuries.

The InVivo clinical trial is ongoing, and other patients appear to have done markedly better. Ten patients have now gotten the scaffold implanted, and the company says five of them have seen enough progress at the six-month mark after injury to indicate that the scaffold is probably achieving its goal. (One patient’s results were published as a case report in a scientific journal.)

In fact, with a dozen patients still left to be enrolled, the trial has already reached the threshold for demonstrating that the device is probably working. InVivo hopes to file for regulatory approval by early 2018 at the latest. But the company’s stock has struggled; it’s now down to a third of its peak since the trial began in late 2014.

Stracham says the InVivo investors who scoured her social media accounts and badgered her with questions about her progress — seeking hints on whether to buy or sell InVivo stock — don’t bother her much anymore, now that she’s past the crucial first year of the trial. And she’s no longer dating the first patient enrolled in the InVivo trial, an Arizona man paralyzed just a few months before her who she met through their shared experience in the trial.

n the past six months, Stracham says she has regained the ability to fully move her hips and to feel deep pressure in her thighs. She’s hopeful that these improvements will be reflected in the results of her next official checkup in January, but it’s unknown what contribution, if any, the scaffold may have made in her recovery.

Stracham’s focusing less these days on her long-term quest to walk again. Her life, she said, has grown richer as she has embraced her wheelchair. She recently started working full-time in sales for a catheter supply company and dived into advocacy work to support other spinal cord injury patients.

“When I first got hurt, I hated every minute of it,” she said. “And then I found a way to live.”