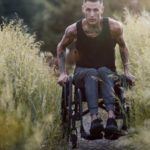 Five years of pain can wear anyone down. Ask Josh Heine, and he’ll tell you healing often takes longer than expected.

After a near-fatal car crash in 2007, the 28-year-old Paducah native was left with only limited upper mobility. He had to adapt quickly to life as a quadriplegic, or so people told him.

Now after regaining limited use of his arms and legs, and with several wheelchair marathons under his belt, Heine has modeled for Quickie — a global wheelchair manufacturer — since last May. As a marketing student at West Kentucky Community and Technical College, he’ll begin a national ad campaign in April through wheelchair distributor Sunrise Medical.

He hopes to boost his marketing career, he said, by working avidly on the campaign and appearing in ads as a testament to his own recovery.

While Heine credits grueling work for that recovery, he said part of his motivation has been to show others that it’s possible to regain an active lifestyle.

“I got in better shape, I met a beautiful girl, I started school. I got a job as a model for a huge wheelchair company.”

While this campaign could lend Heine a crucial career boost in marketing, his aspirations include a larger goal — helping others stay active in spite of paralysis. As founder of the nonprofit Heine Wheelchair Racing, he hopes to aid others like him in maintaining an active lifestyle by getting the wheelchairs and equipment they need.

The past 10 years of his life came about, he said, when he impulsively took his father’s Porsche “for a spin” one morning at age 18.

A week prior, he’d learned he was going to be a father — a distraction that contributed to veering offroad at 80 mph, ejecting him from the car.

“I think maybe I know what dying feels like,” he said. “At least a little bit. I was never knocked unconscious. I was on the ground, trying to grasp my breath, dying.”

Among other serious injuries, Heine had two compression fractures on his spinal cord, leaving him paralyzed from the neck down.

He credits a Louisville neurosurgeon who was working at Lourdes hospital in Paducah that night for not losing everything.

“Whatever I have now, I owe to that man,” he said. “Most have to wait days or weeks to get adequate medical treatment like that. I got it in two hours.”

The following months tested his resolve. He was always an active student-athlete, he said, and the bitterness dug deep as he fought to stand up on his own.

“Some people were telling me I was in a wheelchair now — that I had to deal with it,” Heine said, but he wasn’t willing to accept it. “I wanted to stand and walk.”

Heine was back on his feet four months later, but he doesn’t celebrate the memory. He said the NeuroRecovery Network in Louisville “blew the doors wide open” for his recovery, but progress was painful.

By then he was classified as an incomplete tetraplegic, meaning he has limited use of his arms and legs.

“They got my gait going,” he said. “They’re the reason why I can stand and do the things I can today. But (my son) drove me to also get up on my feet. And fear, it terrified me and pushed me to work out harder. To go further.”

For several years, Heine was unwilling to talk about his injuries, but now he’s more open to telling his story to help others.

“Now that I’m sharing this, people message me asking, ‘What did you do?’ I tell them I didn’t give up on myself.”

“There’s not a cure for paralysis. You might be paralyzed the rest of your life — you might not — but it’s the idea that one day you might not be if you do something.”

By Mason Blanford The Paducah Sun

To learn how you can get involved, visit www.HeineWheelchairRacing.com.

Injured hockey player takes one step at a time