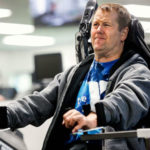 Todd Duitsman has made extraordinary progress since he suffered spinal-cord injuries while body surfing at Big Beach on Maui in 2014. And with unfailing grace and good humor, he inspires others.

EVERETT — With a weightlifter’s grimace, Todd Duitsman focused on exercising his arms. Like most everyone else using the Marysville Family YMCA’s fitness equipment, he was hard at work.

But Duitsman isn’t like everyone else. The Stanwood man is a quadriplegic.

It was July 2, 2014, when he suffered spinal-cord injuries while body surfing at Big Beach on Maui. He and his wife, Tammi, were with their three children to celebrate daughter Hailey’s graduation from Lakewood High School.

“We had just gotten there,” Duitsman, 48, said. “I love being in the water. I was up on a big wave; it was perfect.” But in short order, he said, his head was slammed “like a human dart into the sand.”

Duitsman couldn’t move. He said his first thought was “God, is this how I’m checking out?” And without the ability to flip over and get out of the water, he feared that time would run out.

When Gould and Duitsman’s son Tyler, now 23, came to the rescue, “Bary thought I was joking,” Duitsman said. He spent about two weeks at Queen’s Medical Center in Honolulu before being transported on a medical flight to Seattle. He shared those experiences on a Facebook page, “Big Daddy’s Big Adventure.”

Since those devastating days, Duitsman has made extraordinary progress. And with unfailing grace and good humor, he inspires others.

“Being nice matters,” he said, telling of how a long-ago classmate from Lynnwood High School sent him balloons in the hospital. He said she later told him, “you were always nice to me.”

Duitsman spoke about his challenges at a YMCA of Snohomish County event in March celebrating the Y’s 2017 Annual Campaign, which raised $1,552,536. The money will support Y programs including child care, teen services, water safety, mentoring and summer camp.

“My whole world was rocked. You can’t even scratch your face,” he told the audience in the conference center at Xfinity Arena in Everett. He shared how the Y became a lifeline after insurance coverage for physical therapy ran out. “I met friends — they have special challenges,” Duitsman said. “I’m staying positive because someone always has it worse.”

With injuries to his C3-C4 and C6-C7 vertebrae, Duitsman is affected by partial rather than complete paralysis. With help, he is able to stand. And at the Marysville Y, supported by others, he moved his feet for several tentative steps.

Amid quips about “Todd the odd quad,” Duitsman was helped to his feet by Kacey Walker, his friend, assistant and driver. Duitsman calls the 22-year-old Walker “my right-hand man.” The two met at the Marysville Y.

Duitsman works out with the encouragement of Scott Ballenger, a part-time diverse abilities trainer at the Marysville Y. Ballenger, 59, has been in a wheelchair since being injured in a shallow diving accident at age 15.

It was Ballenger who contacted Duitsman about wheelchair rugby at the facility. More than a year after his injury, Duitsman began working out regularly there.

From his wheelchair, Duitsman used his arms to lift weights using an Uppertone exercise device, which was designed by a quadriplegic. With his hands anchored by upright guides, and with Walker’s help, Duitsman was able to push forward, raising the weights behind him.

Before his accident, he worked in real estate with Keller Williams Realty in Marysville. The company has been supportive, he said, and he’d like to get back to his real estate career. Duitsman also knows that through his adversity, he can help others. Duitsman is working on a book. He uses his cellphone, which is tethered to his wheelchair, for dictation.

“Todd can be an inspiration,” said Ballenger, who has watched Duitsman work out at the Y with his children.

Duitsman, too, has found inspiring people at the Y, including Quinton Morris. Also in a wheelchair, Morris has cerebral palsy. He has raised money for the Y campaign by dragging a weighted box, lap after lap, around the Marysville YMCA gym.

Duitsman said his Christian faith, his wife and family have kept him going through the toughest times.

“My wife is the real trooper. And I love Jesus Christ,” said Duitsman, who belongs to LIFEchurch360. “The week before this happened, I was running 10 miles and playing basketball with high schoolers. This is all just a journey. I want to be running and playing again.

And then, he and his right-hand man were off to their next stop — a hot-yoga studio for another workout.

Caring for Your Baby’s Health – What New Dads Need to...