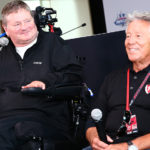 INDIANAPOLIS, Indiana — They stared each other down with seemingly serious intentions, two racers sounding like boxers as they engaged in playful trash talk and measured each other.

“Just take it easy on me,” said Sam Schmidt, the quadriplegic in a wheelchair.

“Just take it easy on me,” said Mario Andretti, the 77-year-old Hall of Fame legend with 52 career Indy car wins, including the 1969 Indianapolis 500. “We might not be friends after tomorrow.”

The stage was set for Saturday’s semi-autonomous motorcar (SAM) race at 12:35 p.m. ET at Indianapolis Motor Speedway, where a man paralyzed from the neck down will complete against a motorsports icon thanks to global technology company Arrow Electronics instilling sophisticated modifications to two unique cars.

Schmidt will drive a Chevrolet Corvette Z06 with sensors mounted on a high-tech driver headset, which connects with an infrared camera mounted on the dashboard and detects head-tilt motions to steer. A sip-and-puff device that Schmidt breathes into enables him to accelerate and brake. Schmidt, the 52-year-old Schmidt Peterson Motorsports co-owner, will use voice commands to switch gears.

Andretti will have the same technology in his Arrow-modified Chevrolet Corvette Stingray when they race on the 14-turn, 2.439-mile road course. It’s the first time two semi-autonomous cars will race head to head.

“I’ve never been so nervous in my life,” Andretti said with a smile. “I haven’t had any sleep the last two nights, and I’m not going to have any sleep tonight.”

Andretti realized after they turned practice laps Thursday that he’s facing a bit of a learning curve. Schmidt has operated these cars before, turning IMS laps that topped 150 mph last year on the 2.5-mile oval. But Andretti is still figuring it out.

“I’ve been thinking for 15 hours how I think he’s sandbagging,” Schmidt said of Andretti. “I think he’s pulling an Al Unser or a Bobby Unser-type era thing where he’s like: ‘Oh, I’m so slow, give me my hands back. I’m so slow, give me my feet back. You know what, let me forget the controls, let me drive the car, because I don’t want to be last.’ That’s all he said was, ‘Don’t lap me.’ I’m thinking all night, ‘He’s just playing us, right?’”

The race benefits Conquer Paralysis Now, a non-profit organization and leading authority on spinal cord injury research and treatment founded by Schmidt. Fans can make $10 donations by texting to 50555 and typing either “MARIO” or “SAM” as their choice to win. More information can be found on the Conquer Paralysis Now website at http://conquerparalysisnow.org/.

“Our mission statement is to cure spinal cord injury, ultimately,” Schmidt said. “We also know there are a lot of steps that have to be accomplished before that. We have created challenges in chronological order of things we think we need to do to get to that ultimate goal.

As unbelievable as it sounds, that includes driving, too. Schmidt, who has been in a wheelchair since sustaining injuries in a 2000 testing crash, is living proof.

Indianapolis Motor Speedway President Doug Boles acknowledged that Andretti needed some time to get a sense of direction and understanding of the controls during Thursday’s test drive.

“You did apologize to me for almost running over some Yellow Shirts (IMS Safety Patrol members) you shouldn’t have been mean to,” Boles said jokingly to Andretti.

Added Andretti, “This is the first time in my racing career that I’m not asking for more horsepower. I’m truly scared, but I trust it.”

It would be human nature for someone to suggest just seeing Schmidt drive a car should be considered a victory. But don’t forget Schmidt, like Andretti, is a fiercely competitive racer.

Schmidt the car owner has entered a car in the Indianapolis 500 each year since 2001. Last year, one of his cars qualified the fastest as James Hinchcliffe drove the No. 5 Arrow Electronics Schmidt Peterson Motorsports Honda to the first Verizon IndyCar Series pole of his seven-year career. Schmidt, Mikhail Aleshin and Jay Howard will drive Schmidt Peterson Motorsports cars in the 101st Indianapolis 500 presented by PennGrade Motor Oil on May 28.

Don’t think for a second Schmidt is just happy to race against Andretti for a worthy cause.

He expects the legendary Andretti to race him hard.

By Phillip B. Wilson

It seems tragic, but he says it’s a challenge