Patients with Complete Paralysis Show Additional Recovery of Arm, Hand and Finger Function at 9-months After Treatment with Asterias’ AST-OPC1 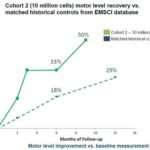 “The new efficacy results show that previously reported meaningful improvements in arm, hand and finger function in the 10 million cell cohort treated with AST-OPC1 cells have been maintained and in some patients have been further enhanced even 9 months following dosing,” stated Dr. Edward Wirth III, Chief Medical Officer. “Gains in motor function, such as the improvements observed in the SCiStar study to date, have been shown to increase a patient’s ability to function independently following complete cervical spinal cord injuries. We are increasingly encouraged by these continued positive results, which are remarkable compared with spontaneous recovery rates observed in a closely matched untreated patient population.”

Improvements in upper extremity motor function are being measured using the International Standards for Neurological Classification of Spinal Cord Injury (ISNCSCI) scale, widely used to quantify functional status of patients with spinal cord injuries. Both subjects and physicians consistently report that improvements in upper extremity motor function are the most desirable functional improvement target in the quadriplegic population, as they can have a significant impact on functional independence, quality of life and cost of care from even relatively modest changes. The SCiStar study is monitoring two separate ISNCSCI measurements of upper extremity motor function. The upper extremity motor score (UEMS), is a linear scale used to quantify motor function at each of five upper extremity muscle groups driving arm and hand function; these scores are also used to determine “motor levels”, which define the level within the cord above which a subject has normal function. As suggested by existing research, patients with severe spinal cord injuries that show two motor levels of improvement on at least one side may regain the ability to perform daily activities such as feeding, dressing and bathing, which significantly reduces the overall level of daily assistance needed for the patient and associated healthcare costs.

A total of six patients were enrolled and dosed in the AIS-A 10 million-cell cohort, with five of six patients completing a 9-month follow-up visit. The results include the following highlights:

As previously reported, Asterias will report 12-month efficacy and safety data from the AIS-A 10 million cell cohort sometime late in the third quarter 2017 after the 12-month results are collected for the entire cohort.

Each year in the U.S. more than 17,000 people suffer a severe, debilitating spinal cord injury. These injuries can be devastating to quality of life and ability to function independently. Lifetime healthcare costs for these patients can often approach $5 million. Improvements in arm, hand and finger functional capabilities in these patients can result in lower healthcare costs, significant improvements in quality of life, increased ability to engage in activities of daily living, and increased independence.

The SCiStar trial is an open-label, single-arm trial testing three sequential escalating doses of AST-OPC1 administered at up to 20 million AST-OPC1 cells in as many as 35 patients with sub-acute, C-5 to C-7, motor complete (AIS-A or AIS-B) cervical SCI. These individuals have essentially lost all movement below their injury site and experience severe paralysis of the upper and lower limbs. AIS-A patients have lost all motor and sensory function below their injury site, while AIS-B patients have lost all motor function but may retain some minimal sensory function below their injury site. AST-OPC1 is being administered 14 to 30 days post-injury. Patients will be followed by neurological exams and imaging procedures to assess the safety and activity of the product.

Asterias has received a Strategic Partnerships Award grant from the California Institute for Regenerative Medicine, which provides $14.3 million of non-dilutive funding for the Phase 1/2a clinical trial and other product development activities for AST-OPC1.

Additional information on the Phase 1/2a trial, including trial sites, can be found at www.clinicaltrials.gov, using Identifier NCT02302157, and at the SCiStar Study Website (www.SCiStar-study.com).

AST-OPC1, an oligodendrocyte progenitor population derived from human embryonic stem cells, has been shown in animals and in vitro to have three potentially reparative functions that address the complex pathologies observed at the injury site of a spinal cord injury. These activities of AST-OPC1 include production of neurotrophic factors, stimulation of vascularization, and induction of remyelination of denuded axons, all of which are critical for survival, regrowth and conduction of nerve impulses through axons at the injury site. In preclinical animal testing, AST-OPC1 administration led to remyelination of axons, improved hindlimb and forelimb locomotor function, dramatic reductions in injury-related cavitation and significant preservation of myelinated axons traversing the injury site.

In a previous Phase 1 clinical trial, five patients with neurologically complete, thoracic spinal cord injury were administered two million AST-OPC1 cells at the spinal cord injury site 7-14 days post-injury. They also received low levels of immunosuppression for the next 60 days. Delivery of AST-OPC1 was successful in all five subjects with no serious adverse events associated with AST-OPC1. No evidence of rejection of AST-OPC1 was observed in detailed immune response monitoring of all patients. In four of the five patients, serial MRI scans indicated that reduced spinal cord cavitation may have occurred. Based on the results of this study, Asterias received clearance from FDA to progress testing of AST-OPC1 to patients with cervical spine injuries, which represents the first targeted population for registration trials.

Asterias Biotherapeutics, Inc. is a biotechnology company pioneering the field of regenerative medicine. The company’s proprietary cell therapy programs are based on its pluripotent stem cell and immunotherapy platform technologies. Asterias is presently focused on advancing three clinical-stage programs which have the potential to address areas of very high unmet medical need in the fields of neurology and oncology. AST-OPC1 (oligodendrocyte progenitor cells) is currently in a Phase 1/2a dose escalation clinical trial in spinal cord injury. AST-VAC1 (antigen-presenting autologous dendritic cells) is undergoing continuing development by Asterias based on promising efficacy and safety data from a Phase 2 study in Acute Myeloid Leukemia (AML), with current efforts focused on streamlining and modernizing the manufacturing process. AST-VAC2 (antigen-presenting allogeneic dendritic cells) represents a second generation, allogeneic cancer immunotherapy. The company’s research partner, Cancer Research UK, plans to begin a Phase 1/2a clinical trial of AST-VAC2 in non-small cell lung cancer in 2017. Additional information about Asterias can be found at www.asteriasbiotherapeutics.com.

Paraplegic guitar builder in tune with his craft