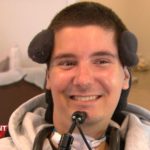 A young man rendered a quadriplegic by a freak footy accident now has a house designed to meet his every need thanks to the generosity of friends, the community, and the audience of A Current Affair.

Kurt Drysdale was just 20 when he injured his spine in a wayward tackle during a weekend rugby league match.

He was left unable to breathe on his own and without most of his movement, and faced spending the rest of his life in hospital or care.

However, his family was determined to bring him home.

Kurt’s parents Steve and Sonya knocked down their old family home to build a new residence that could accommodate Kurt and the nursing staff that he required for 24-hour care.

The rugby league community rose to the occasion, as did locals, but it wasn’t until A Current Affair viewers joined the fundraising effort that the family found themselves ready to build.

The house is equipped with a specially modified kitchen, and an apparatus to help Kurt in and out of bed, among other facilities.

There was even enough money left over to establish a trust for Kurt’s ongoing treatment and care.

At his emotional homecoming, Kurt, now 23, said he was very grateful for the support.

“If it wasn’t for (donors), I wouldn’t be here and this house wouldn’t have been built for my needs,” he said.

“Thank you so much to everyone out there who has contributed to me and the family.”

It had been two years since Kurt had been home, and he said he had “learnt a lot” in that time.