A phone call helped inspire Will to seize the high ground 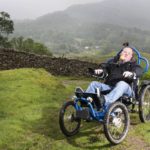 SINCE a life-changing accident five years ago, wheelchair user Will Clark, from Grasmere, has become a charity volunteer, taken up sailing and ski-karting and addressed an international spinal injuries conference. Recently elected as a county councillor, he decided his next challenge would be to conquer Snowdon.

Latrigg, above Keswick, isn’t a particularly high or challenging Lake District fell but it became a symbol of what might be possible for Will Clark.

Will was still in a high-dependency unit following a life-changing accident when a phone conversation with a man called Andy – who was calling from the top of Latrigg – gave him a vision of a future when he’d be able to get back to the Lake District landscape that he loves.

Will, who was then 27, was in a spinal injury unit following an accident on his bike which had left him paralysed from the shoulders down.

Andy, who has a similar injury, became Will’s mentor. “Knowing life was going to be different but not knowing in what way, it was great to speak to Andy, who was about six years down the line from when I had my accident,” says Will.

“He could talk about the things that he’d done since then. During one of the early conversations, he was on the top of Latrigg. It kind of gave me confidence and reassurance that I would get back on the fells.”

Since then, Will, who lives in Grasmere, has made it back on the fells. He’s been to the top of Latrigg using his all terrain battery-operated Boma bike, which he manoeuvres via chin-control steering.

Earlier this year, he led an outdoor activities course on behalf of the national spinal injury charity Back Up.

It was the same course which Andy, his Back Up mentor, had been leading five years previously.

Will, 32, has learned how to sail on Windermere, travelled to Sweden to take part in a ski-karting course and been pushed around the Great North Run half-marathon route to raise money for Great North Air Ambulance – the charity which airlifted him to hospital following his accident.

He’s travelled to Vienna to address an international spinal cord injury conference, is a charity volunteer and, earlier this year, successfully stood as a Cumbria county councillor for the Lib Dems. “I’ve got to be careful what I keep saying yes to,” he jokes.

Last month he took on a new challenge – dubbed Get Will Up A Hill – which saw a team of friends push him to the summit of Snowdon.

The challenge marked five years since Will’s accident and saw him raise £8,000 for Back Up.

Will is keen to support charities and local causes after learning first hand what it can mean when a community rallies round.

After his accident, friends and family spearheaded a fundraising campaign for The Will Clark Fund, which paid for adaptations at his flat in Grasmere and for equipment that enables him to do more or makes his life easier.

“People really pitched in and really came together to help me,” he says. “I know that’s not the case in other locations. I’ve heard stories of people really struggling.”

Will had been taking part in a charity triathlon on July 7 2012, when his life changed.

The keen fell runner and cyclist had been intending to complete all three sections of the event and had already swum across Grasmere and back.

Will got on his bike and set off on a circuit of Thirlmere. He says: “It was at the back of Thirlmere, there was just a lot of debris on the road and I got a stick in my wheel. The stick just stopped the bike dead and sent me straight over the handlebars.”

Realising that Will was hurt, a friend flagged down a car and got a lift to the top of Dunmail Raise from where she could get a mobile signal and summon help.

Local GP Alan Jackson was first on the scene and Will, who was conscious throughout, says the experienced doctor was as white as a sheet.

It was a clue for Will that his injuries were to prove serious. He was airlifted to Newcastle Royal Victoria Infirmary and his family rushed to his side.

After being transferred to a specialist unit at Middlesbrough, he spent 12 weeks on a ventilator being helped to breathe.

Will’s mum, Angela, stayed with him for most of his time in hospital and he had other visitors.

He describes his mood as frustration with being laid up, coupled with a need to know how much he would be able to do. He says: “I just wanted to know what was possible and what my future held.”

He was discharged to his mum and dad’s house in Grasmere, which they run as a B&B, just before Christmas 2012 and had to learn how to manage a range of medical issues associated with the injury.

One of the first things Will did after he came home was to go into Grasmere School, where he had been a primary school pupil, to talk to the children.

A teacher asked if Will would mind if the children asked him questions. He was worried about what to expect but was soon reassured. He said: “Once they knew how I got into bed and a couple of other things, it was normal things that kids ask, like what’s your favourite breakfast cereals. The chair didn’t faze them.”

He has continued to visit the school as a volunteer helper: “It’s nice to see what they get out of it. That’s a big thing, because of the community support I got when I got home.”

The Will Clark Fund had already been launched and was chaired by Chris Carss, the owner of Rothay Garden Hotel, where Will had been working as a trainee manager before the accident.

“It was quite promising because it was a good job in the local area and there was a good bit of learning and development during that first year.

Ironically, I got promoted to assistant manager the week before the accident – I think Chris said to my mum he’s glad we had that conversation prior to the accident happening.”

The former Lakes School pupil had moved back to Grasmere in 2011, having first left home to study business management and outdoor recreation at university in Sheffield.

After graduating, he’d worked as a ski guide in the Alps and spent a summer as a group activity leader in the south of France.

He also did a ski season in New Zealand and travelled in Fiji, Thailand and China.

Back in the UK he spent a year in London selling ski holidays. Will traces his political awareness back to his parents, Martin and Angela, who encouraged him to vote as soon as he was old enough.

He’d already met Tim Farron at events such as Grasmere Sports – where they’d both tackled the Senior Guides Race – and when the Lib Dem won the Westmorland and Lonsdale parliamentary seat in 2005 by just 267 votes, Will realised that his vote counted.

It was Tim, who had already intervened to help the Clark family access funding for a power chair, who spotted the potential for Will to serve as a county councillor.

Will hopes his role representing the Lakes Division will enable him to make a contribution to the community and he says he was amazed and grateful to get 53 per cent of the vote.

He says: “It’s a case of proving people wrong. I like to think that I can make a difference. It will be quite a steep learning curve for me.”

Charity work is important to Will and he give awareness raising talks about the Great North Air Ambulance Service: “It’s an unbelievable service we take for granted. I was young and fit and therefore didn’t think I’d need it.”

He supports the Calvert Trust, which provides adventure holidays for disabled people, and was involved with the charity’s 2016 Go Herdwick public art fundraising project.

There are times when Will gets low but they’ve become fewer and keeping busy helps.

He’s often described as inspirational but he doesn’t feel that about himself. He misses his old life “massively” but wants to keep pushing himself forward.

He adds: “To actually have a purpose and to have things to look forward to, makes a big difference.”

Paralyzed Veterans of America highlights the UnstoppABLE spirit of veterans in...