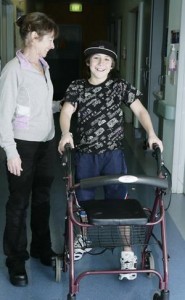 DOCTORS feared Michael Wakeman would never walk again after he crashed a billy-cart into a car.

The 13-year-old had completely dislocated his spine, compressing a disc and squashing the nerves supplying the muscles to his legs, bladder, bowel and genitals.

Michael was riding the old cart down a road in Mount Colah in Sydney’s north six weeks ago when he hit a parked car and spun 180 degrees, slamming his back into the side of the car.

An ambulance helicopter transferred him to The Children’s Hospital at Westmead, where doctors found he was completely Paraplegic on his left side, and had just a flicker of movement on his right.

“When I looked at the scan I felt sick, it was so awful,” consultant neurosurgeon Brian Owler said.

“I thought his chance of walking and regaining bladder and bowel continence was virtually nil.”

Tests showed Michael had injured a mass of nerves at the bottom of the spinal cord called the Cauda Equina, because it resembles the tail of a horse.

The L2 and L3 vertebra in his lower Lumbar spine were fractured and dislocated, damaging the sensory nerves so Michael could not feel his legs.

Within four hours of the accident, Michael was on the operating table. Dr Owler adjusted the spine into normal alignment and stabilised it using 11 screws.

Plucky Michael surprised everyone, including his surgeons and physiotherapist mother Jane Stubber, when he moved his right hip, quadriceps and knee the next day.

Within a week, he regained bowel and bladder control, began to get some movement in his left leg, and could even feel his feet.

He was moved into the Spinal Cord Clinic and began Rehabilitation, using a walking frame and full-leg callipers to move around. Last week, the soccer-mad teenager began to wiggle his toes and doctors expect he will eventually need only ankle orthotics.

Michael faces three months of in-hospital rehabilitation and a slow and painful two-year recovery. It is possible some damaged nerves might grow again and he will regain full function.

Ms Stubber, who will assist the rehab process using her physio skills, praised the ambulance officers and hospital staff. “They do miracles here,” she said.

Spinal cord injury affects about 12,000 Australians, with 300-400 new cases each year. Most are caused by risk-taking behaviour, usually by young males.