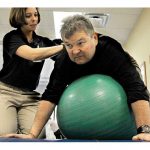 Accident damages Gainesville man’s body but not his spirit

ATLANTA — Vester Lewis is getting used to what he calls “the new normal.”

Normal for him used to be enjoying his retirement from AT&T with his wife, Lynn, ministering to kids at Hopewell Baptist Church, playing with his grandchildren and taking lunchtime jogs near his home off Tanners Mill Road.

All that changed on the afternoon of May 7 when a car driven by an alleged drunken driver plowed into him as he jogged along the side of the road, sending him flying. The impact cracked his ribs, collapsed a lung, tore ligaments in his knee and broke his back.

“It was like a missile, and I couldn’t get out of the way,” said Lewis, who has spent the last three months at the Shepherd Center, an Atlanta hospital that specializes in catastrophic spinal cord injuries. He has very limited movement of his legs and cannot stand or walk on his own.

“When (the car) hit me, it hit me so hard, I thought I was going to heaven,” Lewis said.

But Lewis, 56, said he believes God had other plans for him.

Normal now is wheelchairs and seemingly endless therapy sessions, workouts so intense that afterward he returns to his on-site apartment and “passes out” from exhaustion.

Normal is talking with other folks who are in similar situations, offering comfort when he can, taking lessons from others.

“I feel like the Lord had a reason for this, and one of the reasons was that I could be an encouragement to other people here,” Lewis said. “And there are people who I’ve been able to pray with and encourage, and there have been people who have encouraged me.”

For a man who doesn’t know yet if he will ever walk again, Lewis appears remarkably positive. He is one of a select few enrolled in an aggressive Rehabilitation program aimed at returning to mobility with the help of harnesses and treadmills. The long-term prognosis is uncertain, but Lewis said his legs become stronger each day. 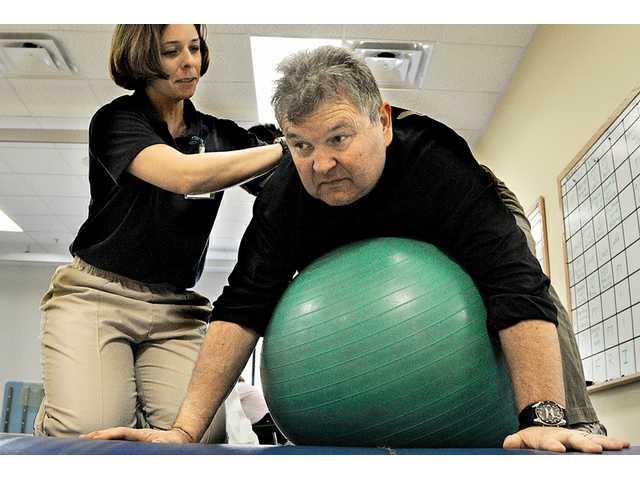 The woman who authorities say struck Lewis with her car, 46-year-old Annette Jackson of Gainesville, has pending charges of DUI and felony serious injury by vehicle. It was her second DUI arrest, according to court records.

Lewis said he “doesn’t have hard feelings,” against Jackson, though he added, “I wish she wasn’t drunk at 1 o’clock in the afternoon.”

“That person needs help as bad as anyone else,” Lewis said. “Hopefully, they will get their life right. I would love to see them in church. That’s what’s changed my life.”

The only time Lewis chokes up is when he talks about the children who he visited in hospitals as part of his church work and how kids are now sending him cards and praying for his recovery.

“If anything else comes of this, it will help me relate to them more,” he said.

Lewis, his wife and their adult daughters have received an outpouring of support from the Gainesville community. Volunteers have been hard at work making the Lewis home handicapped-accessible. It should be ready for his return home Aug. 22.

On Aug. 26, a charity golf tournament will be held at Chicopee Woods Golf Course to help defray the expenses the Lewis family has incurred through the ordeal.

Lewis said he’s taken valuable lessons from this new challenge and relied heavily on his faith for strength.

“You may be sitting in a wheelchair or walker or crutches, but you’re still the same person,” Lewis said. “You still can make a difference.”

Lewis said the children who pray he walks again “hope the Lord answers their prayers, and I do to.”

But either way, he will live “the new normal” life the best he can.

“I’ve got the hope of walking again, but if I’m not able to walk, I’ll still be able to live.”

A better world for wheels on Google Maps