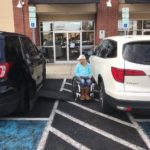 Rachelle Friedman Chapman – known by many as “the paralyzed bride” – is calling attention to the way people park in and around handicap-accessible spaces.

Chapman, who lives in Knightdale, shared a recent experience in a Facebook post Wednesday showing an SUV in a handicap space parked across the line, into the section designated for wheelchair access.

Chapman was unable to use the wheelchair ramp to her own SUV because the other vehicle was parked outside its boundary.

“What people don’t realize, is that those lines are for a ramp and/or for wheelchair users to transfer,” Chapman wrote. “Because of the way this person parked, I cannot get back into my car independently and it keeps me from wanting to branch out and drive on my own.”

It would be really great if people knew why the spot says “van accessible”. The white car has a handicap tag but apparently doesn’t know what the lines are for. It’s for a ramp or for someone to transfer into their chair. Can y’all RT so I can stop getting shut out of my car? pic.twitter.com/E6gaMABAxD

Driving is new again for the 32-year-old, who has been paralyzed from the chest down since a freak accident at her bachelorette party in 2010. A bridesmaid playfully pushed her into a shallow portion of a swimming pool, resulting in a spinal cord injury.

Chapman has become a public figure as she’s worked to overcome challenges since the accident.

She wrote a book and has been featured in Cosmopolitan magazine. A handicap-accessible remodel of the Chapmans’ Knightdale home was featured on the “Today” show in 2011, and a dream wedding and honeymoon was funded by 1-800-Registry that summer.

In 2015, she and her husband, Chris, became parents by way of surrogacy.

Chapman said most of the parking errors she comes across involve vehicles parked in handicap-accessible spaces.

“For whatever reason, they are unaware of why these lines are there and they use it as an excuse to park badly,” she wrote. “There are many people who have disabilities that don’t involve wheelchairs and I guess this is something they just have never thought about.”

She continued: “Please, PLEASE Park within the lines. I seriously need to let the world know so that this stops happening and people in wheelchairs can have as much accessibility as possible.”