Para-football gave Colin Shields ‘something to work towards and enjoy’ 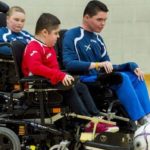 Colin Shields is on the brink of representing his country at a sport he loves, something that would have been inconceivable seven years ago when an accident at work left him paralysed.

The 37-year-old has a spinal cord injury that leaves him reliant on a motorised wheelchair.

His job had included winter gritting and he was carrying out routine maintenance on the truck shortly before New Year. Shields recalls how he slipped, fell off the side of the vehicle and landed on his head, breaking his neck.

The accident, and a lengthy stay in hospital, came just as his family was about to expand.

“My wife was eight months pregnant when I had my accident and my daughter was born almost exactly a month after, while I was in hospital,” he told BBC Scotland. “I was there for seven months.”

His life was turned upside down, as the father of two from Cumbernauld is now unable to work.

“I don’t have a huge amount of use in my arms, decent movement in my right arm, but I don’t have any finger function or anything like that,” he said. “From the chest down, I’m paralysed.”

Before his accident, Shields had played football at amateur and junior level. With so much taken away, he says being able to take part in any sport again is hugely important to him.

“To be able to play any sport in a chair is something that’s given me a sense of purpose – it gets the blood pumping again,” he said.

But it took a few years for him to get back into football.

“It was an old friend from school who coached, a guy called Stuart Aitchison,” he explained. “He heard about my accident and said to me a couple of times, ‘I’m starting this powerchair football, you should come along’.

“I’ve been skiing as a disabled man, as I used to ski before, I’ve seen wheelchair rugby but just wasn’t able enough to play it with the movement in my arms.

“But there’s no fast-paced sport for powerchair users, so when he told me about powerchair football, I thought I’d go along and give it a go.”

The sport is contested in a four versus four format, the players using motorised wheelchairs with an attachment fitted on the front as protection, which is also used to strike the ball.

It is played indoors on a hard surface pitch around 30x18m, roughly the size of a basketball court.

Shields belongs to North Lanarkshire’s Clyde Powerchair FC, one of seven teams in the national league.

Shields hopes to move seamlessly into coaching and is pleased about the commitment from the Scottish Football Association, which includes more than £100,000 of investment and the creation of a united Scottish Para-football Association.

“It’s also about being inclusive – it’s got to mould around all players and all abilities to be an inclusive sport, and that’s what we all enjoy about it,” he added.

“We have kids as young as eight or nine and a gentleman in his 50s.

“From where we were maybe five or six years ago to now being on the brink of having a national team, it’s something for every player to strive towards; to be able to play for your country doing a sport that you love.

“Every boy and girl has that dream as a player and competitor.

“And it’s bringing everyone on to a level playing field in a powerchair, It’s given people with a disability something to work towards and enjoy.”