Quadriplegic Stuart Turner speaks at WIRED2014 via drones and robots 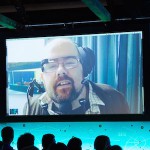 Computer scientist and founder of Robots and Cake Stuart Turner took to WIRED2014’s London stage to talk about open access systems. He did so from just outside Manchester, using a telepresence Beam robot, while flying a Parrot AR drone. And he achieved all of that using only his right index finger and his head.

“I can’t move my body, I can’t get out of this wheelchair — but I can totally fly,” he said. “Robots are awesome.”

Turner began to lose the ability to control his body while studying at university, and became quadriplegic. For more than six years he was unable to leave his 10ft by 10ft bedroom in Manchester. But today he is touring around the WIRED2014 conference at the Tobacco Docks, networking with delegates while simultaneously demonstrating the incredible achievements of his project, Robots and Cake.

The organisation — which brings together people studying robots and disabled individuals — stems from what Turner calls the “extensible self”. Visit Robots and Cake!

“It really feels like I’m reaching out to the world through this screen,” he told the audience. “You guys extend your bodies all the time — you use oven gloves to reach into the oven; you wear goggles to swim underwater; you send your voice down phone wires and into space. I’ve extended myself into this screen, just like that. Using robots to move through places you can’t go is useful and fun — but if your movements are constricted like mine are, it’s life-changing, because often you can’t go anywhere.”

“I’m using robots to access the world, to participate in it. I’m here but I’m not here; I’m driving this thing but I’m not this thing. Being quadriplegic makes me feel a bit like that anyway — there’s a strong sense of being a brain in a jar. It’s a small step to driving a robot.”

Turner, delivering an always engaging talk filled with humour, did have an important note to wrap up his incredible drone-flipping performance.

“None of this would be possible with closed systems.”

“Any time you leave a system open and leave it scriptable, you let people decide how they want to use your tools. Every time you let people use your work to build on it, it makes it easier for me and all people like me to expand our worlds. To extend ourselves.”