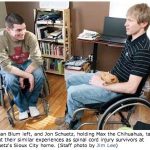 SIOUX CITY — One minute, Jon Schuetz was riding a motorcycle under a sunny Florida sky. The next minute, he was on the ground, crushed against a voltage box, with the cycle on top of him.

Nathan Blum of Schaller, Iowa, was driving a semitrailer in Plymouth County when he reached for something and momentarily took his eyes off the road. The truck suddenly went off the highway and into a ditch.

The two Siouxlanders’ experiences with spinal cord injury are similar in many ways. Both men are 31. Neither lost consciousness when he had his accident and knew something was horribly, frighteningly wrong. Both are paralyzed from the chest down, confined to wheelchairs for the rest of their lives. Both have loving, supportive partners. Both spent time in Rehabilitation facilities.

But there are differences, too. Schuetz has been learning the ropes for slightly less than a year — his accident was March 24, 2007. Blum, injured June 6, 2004, has had nearly four years to adjust to his new way of life. Schuetz broke his neck in four places. Blum broke a vertebra in his lower back.

“I was told, ‘Prepare for the worst, hope for the best.’,” Blum said matter of factly as Schuetz nodded empathetically.

“They told me I’d be able to do whatever I wanted to do,” Blum continued. “But on that first day there (in rehab at Craig Hospital in Englewood, Colo.), I saw others who had it so much worse than me. That changed me.”

Schuetz agreed. “I saw people give up in Omaha who weren’t anywhere near as bad off as I was. It made me grateful.”

“I never knew how easy life in a wheelchair could be,” Blum said.

“Easy is not accurate,” Jamie Blum interrupted with a shake of her head. “That’s deceiving.”

She paused, and the faces around her grew somber.

“Manageable,” she proclaimed as the smiles returned and everyone nodded. “It’s manageable.”

What Blum wasn’t prepared for, and Schuetz acknowledged was a surprise for him as well, was the response from others.

“The stares, the glares and just dumbfounded looks was tough to understand,” Blum said. “They’d raise their voice and I’d think, ‘God, I’m not deaf!’ or they’d speak real slowly like I was dumb.”

“Everybody responds differently,” Schuetz added. “They probably don’t know what to do.” 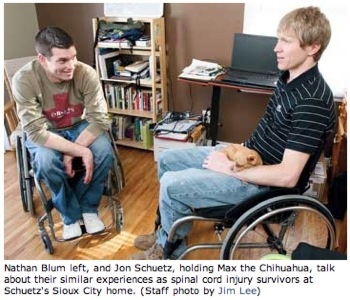 “Jon and my mom and I went out to dinner in Omaha, and I could just feel everyone’s eyes on us,” said Schuetz’s mom, Darlene Olson, who also was visiting. “I asked Jon, ‘Does that bother you?’ and he said, ‘No, not really. They’re just curious.'”

“Small kids are the most curious,” Schuetz said.

“My best friend has kids who ask me, ‘Nate, do your legs work yet?’ or ‘Nate, would you stand up, just for me?’ It embarrasses my friend, but I know the kids mean well,” Blum said.

Managing to get around was one of the skills both men had to learn. Schuetz said Quality Living, the Omaha facility where he had rehab, wouldn’t send him home until he could function on his own without assistance from anyone.

“I think it took me almost two hours to tie my shoes the first time I tried it,” Blum said.

Going out in public is not easy either, but both men have overcome any obstacles.

“I learned real quick that handicapped accessible and wheelchair accessible are two completely different things,” Blum said, and the others agreed.

“Jon has come to the Terra Centre after going to rehab at Mercy and we’ll walk in the skywalk,” Darlene Olson said. “There’s two automatic doors he can’t even open because they’re not handicapped accessible. It’s a joke.”

“One thing that Craig did a lot was to get us out into public,” Blum pointed out.

“Quality did that, too,” Schuetz added.

“I personally welcomed it because it was a way to get out of the hospital,” Blum said with a grin.

It was even an adjustment for those closest to the two men. Jamie Blum, married to Nathan since 2000, admitted she stayed as strong as she could for her husband through the accident and rehabilitation on the recommendation of Blum’s surgeon, who told her, “Don’t cry” in front of her husband.

“A week before the accident, we found out I was pregnant with Drew,” she recalled. “Then, a week later, I’m calling people with the news of the accident. Talk about stress.

“I didn’t flip out until two years later,” she continued. “That’s when I had my meltdown.”

“I’d talk to friends about how Nathan was acting, and they’d say things like, ‘Oh, he’s just trying to set you free.’,” she said.

“When he was driving truck, he wasn’t around that much,” she continued. “All of a sudden, he was around all the time and I — we — didn’t know how to act with each other.”

Erin Olson had met Schuetz through mutual friends in January 2007 but had lost touch when he moved to Florida to work for his cousin. After the accident and when he returned to Sioux City, she visited him in the hospital.

“I think we have a lot in common,” she reflected while looking at Schuetz. “There’s a certain chemistry between us that we even finish each other’s sentences.”

When it was pointed out that lesser women might have left these men with their challenges, both young women almost bristled.

“You don’t look at the chair,” Jamie Blum insisted. “You look at this person you love.”

“I’ve been in other relationships, and this one is so easy,” Erin Olson said, then looked directly at Schuetz and emphasized, “We’re a team.”

Jamie Blum said many harbor the misconception that her husband is dependent on her, and Erin Olson said she has heard that, too.

“I don’t do anything for Nathan,” Jamie emphasized. “He cooks, cleans, watches the boys, does the laundry while I’m at work or school.”

“I’m really 100 percent independent,” Blum interjected. “I even work as the evening manager at the food service at Buena Vista University (in Storm Lake, Iowa).”

As a Paraplegic, Blum has upper-body mobility and fine-Motor skills. As a quadriplegic, Schuetz has limited use of his upper body and no fine-motor skills in his right hand.

“They say you have a two-year window,” Blum said directly to Schuetz. “It’s that first two years when you have the chance of getting something back.”

For the bulk of the conversation, Schuetz held Max, his Chihuahua, on his lap, gently stroking his ears. Blum had a children’s book on his lap that Logan had brought to him, aptly titled, “I Knew You Could.”

“I know it’s important to keep myself busy, and I do,” Schuetz said. “I do some clerical work at the Elks Lodge, and I’m going to be taking some classes online, and I volunteer at Erin’s first-grade class (in Sergeant Bluff).”

“But you have to watch yourself,” Blum advised. “Watch the anniversaries of the accident — the first, the second, the third.”

Then, with a huge grin and moving his chair so he practically faced Schuetz head on, he added: “Don’t let nothin’ stop you. Nothin’! There’s so much out there you can do.”