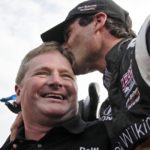 PORTLAND, Ore. (AP) — The stranger had tears in his eyes as he pushed through a crowd to reach Sam Schmidt in his wheelchair.

Schmidt was watching his team tune up a pair of engines, the roar was relentless and the man had to lean in close and shout in Schmidt’s ear to be heard. Thank you, the man said over and over, never expanding upon his gratitude. He tried to shake Schmidt’s hand, awkwardly just patted it, thanked him again and backed away.

“Happens about 10 times a weekend,” Schmidt said. “You never know what the connection is.”

Schmidt is a quadriplegic from an injury suffered when he crashed an Indy car in 2000. He’d given up racing once before, around the age of 11, when his father suffered partial paralysis in an off-road crash. Schmidt was racing motocross at the time and stepped away as his father regained use of everything but his right arm.

Schmidt was back racing again as a teenager, and even after his own accident, the thrill of the competition was just too much to give up. Schmidt became a team owner and life, never easy, has been particularly rough for the organization over the past seven years.

Dan Wheldon was killed driving a Schmidt car in 2011. James Hinchcliffe nearly bled to death in a Schmidt car at Indianapolis Motor Speedway in 2015 when a broken part severed an artery. Now Robert Wickens is hospitalized in Indianapolis with a spinal cord injury. The severity of the injury is unknown — Wickens broke numerous bones including one in his neck and one in his spine — and it may be months before the Canadian knows what kind of recovery he’s facing.

It’s enough heartbreak to make anyone give up the sport that Schmidt calls “particularly unforgiving.”

Yet he has no interest in quitting.

“It’s in my blood, it’s in my chemistry. I want to compete, even if I can’t be a driver,” Schmidt said. “I’ve been racing since I was 5 years old and the victories and the championships, I guess they seemed to make it all worth it. I don’t know why.”

What Schmidt has been able to see and understand is that all the tragedies have helped thousands of others with their own struggles. Schmidt works closely with Arrow Electronics, the sponsor of Hinchcliffe’s IndyCar team, and in 2013 began developing a car that could be safely driven by a paralyzed driver via head movements.

The Semi-Autonomous Motorcar is known as SAM, and in 2014 Schmidt drove it at Indianapolis Motor Speedway, where he hit 97 mph. The car has since hit various milestones for both the technology and Schmidt personally, but the gratification comes from how the project has helped regular people with disabilities resume a regular life.

Schmidt can sound almost clinical in discussing the hurdles, for him and for Schmidt Peterson Motorsports. Hinchcliffe didn’t qualify for this year’s Indianapolis 500 and Schmidt saw team members crying on pit lane.

“We didn’t make the Indy 500 this year and it was devastating. Then you remember back to 2015 when Hinch almost lost his life and you remember there are worse things,” Schmidt said. “Robbie’s situation, my situation, Hinch’s situation — you are given a choice. You can give up and sit on the couch and watch ESPN for the rest of your life and say, ‘To hell with it,’ or you can do everything possible to rehabilitate as far as you can rehabilitate.”

When Schmidt was injured he had a role model in Christopher Reeve, the actor who was left a quadriplegic five years before Schmidt’s injury. When he met Reeve roughly three months after his accident, Schmidt never felt sorry for his own situation.

“Christopher Reeve, that was the worst level of injury and he was on a ventilator,” Schmidt said. “When I met him I thought to myself, ‘Wow, I didn’t think my situation was great, but his was horrible.’ He had a ventilator and he needed six people to get around, on and on, and it really made me understand that things can always be worse.”

Schmidt wasn’t able to see Wickens for nearly two weeks following the August accident at Pocono because the team owner’s mobility restrictions forced him to wait until the 29-year-old driver was transferred from Pennsylvania to Indianapolis. Wickens’ family last week revealed the extent of just how badly he was injured: a thoracic spinal fracture, spinal cord injury, neck fracture, tibia and fibula fractures to both legs, fractures in both hands, a fractured right forearm, a fractured elbow, four fractured ribs and a pulmonary contusion.

Schmidt said he found Wickens to be in the right frame of mind.

“He was, ‘Whatever it takes, I’m going to come back. Just tell me what to do and where to go and how do we get the most direct rehabilitation we can get,’” Schmidt recalled.

Schmidt understands better than anyone what is ahead for the driver. He talks of how his own father persevered — the precedent for how Schmidt approached his own recovery now nearly 20 years ago. And he realizes that he can be Wickens’ biggest ally in a comeback Schmidt believes can happen.

“Robbie is a very driven and motivated driver,” Schmidt said. “That’s the kind of strength and energy you need to get over this. I can talk to him, I can talk to his family, I can let him know what to expect in the coming months, but it’s all about attitude and support and he’s a totally relentless competitor.”