How a ‘nightmare’ motorcycle accident sparked a quadriplegic’s entrepreneurial inspiration 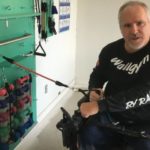 After his physiotherapy ended, a quadriplegic created his own wall gym

Antonio Ramunno knew he shouldn’t have been out on his motorcycle, but it was such a beautiful night. It was almost four years ago. He said he was just ‘pissing around’, doing stuff he knew he shouldn’t.

That’s when he lost control of his bike and wiped out. When he woke up, the 46-year-old’s C-5 vertebrae was injured and he didn’t have any feeling below his chest.

As part of his recovery, the father of four and Kamloops native was regularly going to physiotherapy, until his insurance ran out. With nowhere to go and only inaccessible gym equipment to be found in the city, Ramunno took matters into his own hands and created his own, fully wall-mounted gym.

Regular equipment was too big for Ramunno, or required him to be transferred from his wheelchair.

He remembered how, during earlier physiotherapy, staff would stand behind him and hold his resistance bands while he would stretch them in front of his head as part of his exercises.

“That’s basically how it came about,” he told Daybreak Kamloops host Shelley Joyce.

He needed to create something that could hook it to the wall.

And from its humble beginnings as a piece of wood with a hook, Ramunno’s Wallgym now includes eye bolts, hand weights, an exercise bar, an accessory panel, handles, Bluetooth speakers, leg bands, hand grips, ankle straps and a sweat rag.

“You can literally do every muscle group in the body on this machine,” said Ramunno, who now sells the wall-mounted workout device in Kamloops.

The panel, just two-metres tall, can be mounted on the wall.

After the accident, there were times Ramunno felt like giving up.

“It’s very depressing. Most quads don’t do a whole lot. You just gotta push yourself through. When you feel down, just go outside and smell the air,” says Ramunno, who previously owned his own roofing and siding company.

And when he didn’t feel like pushing, his family was there to do it for him.

“My family helped me so much, pushed me, got me going. Especially my mom. Building three of these wall gyms in her living room. The family has just stuck by me and pushed me and pushed,” said Ramunno.

And thanks to those loving nudges, Ramunno, who is turning 50, has a reason to keep training.

“The only things that go through my mind are my kids and my family. That’s what kept me going, ” he said.

‘I want to get a little bit of my life back’

What Ramunno didn’t expect to come from his accident was his newfound passion.

He now makes the wall-mounts full-time because he believes they can help people, from athletes to paraplegics.

Ramunno says his exercises helped his range of motion and, now, he is able to shift from his chair without the help of a ceiling track.

“I want to work, I want to feel good and I want to get a little bit of my life back,” said Ramunno.

Paralyzed Athlete Eric LeGrand Signs On as Sportscaster With Bucs