Freewheeling bush adventures in a wheelchair 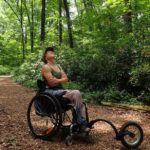 Her studies were almost over and alumna, Helen Smith, had plans. Then a single event meant she had to reach her goals via a very different path. Now she’s pushing against the barriers.

In many ways, the bushwalk through Wolgan View Canyon in Wollemi National Park was like dozens of others that Helen Smith (BSc(Hons) ’09 PhD ’15) and her friends had previously done together.

The eight of them had been going bush for years, since their student days, when they’d met through the Sydney University Bushwalkers club. And Wolgan View Canyon – a deep, dry fissure through sandstone that winds its way west to Wolgan Valley – was an easy walk by the group’s usual standards. There was no abseiling, and no water to wade through. But there was something different about this trip last June: it was the first that Smith, 31, had done using a wheelchair.

Three years ago, on a canyoning expedition planned to celebrate the submission of her PhD in biology, Smith stepped on a rock that gave way. She fell 12 metres and broke her back in three places. She is now a T10 paraplegic, unable to move from her waist down. 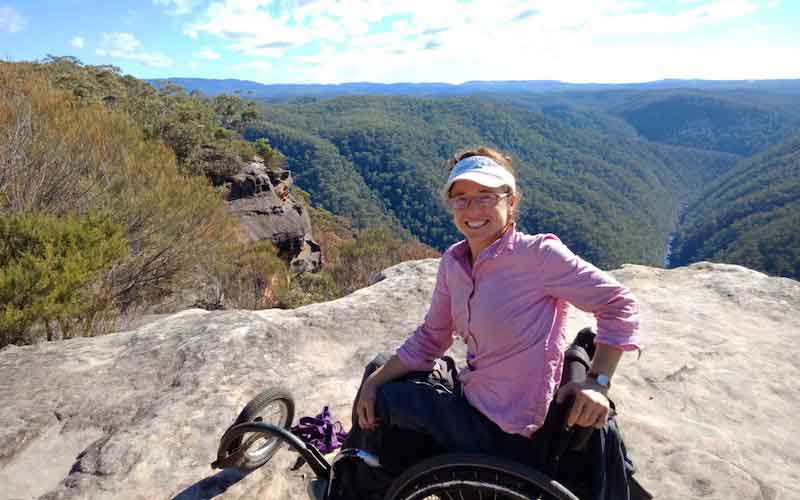 To tackle the canyon in her chair, Smith attached an extra wheel to the front for stability on rough terrain. Some members of the group walked with ropes attached to Smith’s chair to ensure that everyone was moving at the same pace and to give her a hand on steep uphill slopes. Where there were logs or other obstacles across their path, her friends would lift the chair up and over them.

The bushwalk ended with spectacular views across the valley. “It was just awesome to have made it to the end,” says Smith. “That feeling of being alive and outdoors and free: that was a feeling I thought I’d never have again.”

Since her days as an undergraduate science student at the University of Sydney, Smith has been driven by her love of wild places. She chose to do a PhD – investigating whether the reintroduction of native bush rats could stem the invasion of black rats – to get the skills she’d need to work as a wildlife ecologist. “I had this really clear idea that I wanted to work on a remote property for the Australian Wildlife Conservancy,” she recalls.

While that dream is no longer a practical option, Smith has worked hard to create new possibilities. In the past three years she has achieved things that seemed impossible in the weeks and months that followed her accident. 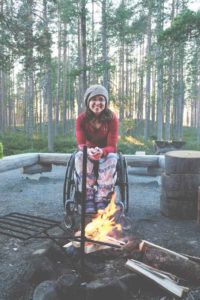 She can’t remember much about the fall itself, but she does remember its aftermath. Regaining consciousness in the bush, struggling to breathe. Hearing her friends set off the electronic distress beacon they’d carried just in case. Lying on a stretcher in a helicopter. Landing on the rooftop helipad of Royal North Shore Hospital. Waking in intensive care after emergency surgery, feeling hungry, wanting a muffin and a coffee.

In the six weeks she spent in hospital, Smith clung to the hope that she might walk again. The grief she felt when she realised she wouldn’t was shattering. It lasted about two years and felt as though she’d lost a person she’d loved. “And in a way, you have,” she says now. “You’re experiencing the death of a part of yourself. I think it’s probably only this year that I’ve come to the point where I don’t feel that deep sadness anymore.”

After hospital, Smith moved to a rehabilitation centre in Ryde. The fellow patients she met there all had different goals: some wanted to relearn to play musical instruments, others to paint.

“For me,” says Smith, “it was about being able to live independently, staying active and working out how to build the skill set to do outdoor activities again.”

First, though, she had to relearn skills that had once seemed automatic. How to move from bed to a chair. How to put on pants. How to make a cup of tea. How to get around. “It felt like doing a PhD all over again,” she says.

It was while she was still in hospital that Smith did her first bushwalk using a wheelchair – a circuit of Narrabeen Lagoon, on Sydney’s Northern Beaches. “It’s about eight-and-a-half kilometres,” she says, “but at that point I didn’t have a lot of upper-body strength. I got about two-thirds of the way around before thinking, ‘This is the hardest thing ever.’”

“It’s one of life’s great pleasures to do the things that people think you can’t. ”
Helen Smith

These days Smith does that circuit regularly – “It’s a piece of cake” – but points out that, under the Australian grading system, that track doesn’t qualify as wheelchair accessible. “Which is crazy,” she says, “because it’s one of the best and most inspiring options in Sydney.”

For a bushwalk to be classified as wheelchair accessible in Australia, it must be no longer than five kilometres, with no steep sections, and a flat, even surface. For a person like Smith, that’s pretty dull. 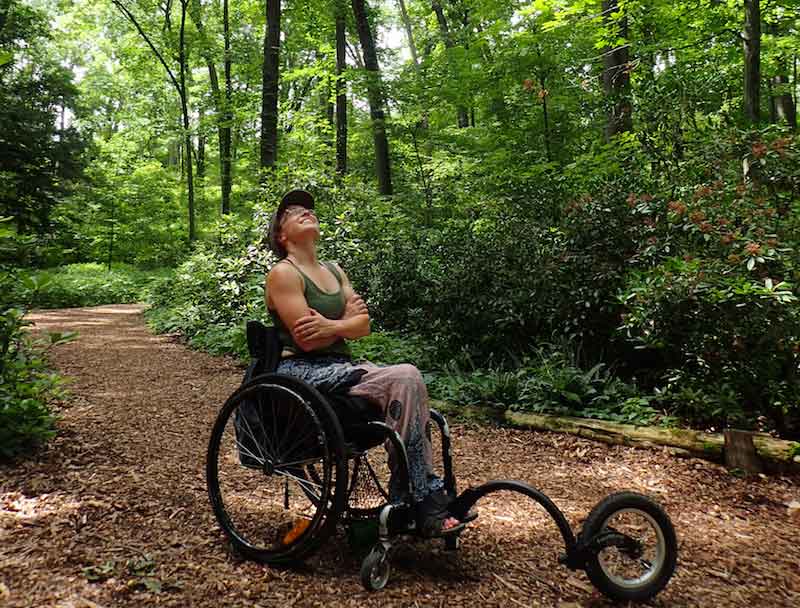 “The standard ones are really unfulfilling,” she says. “It takes longer to get out of the car than it does to do your bushwalk. The thinking has been that we have to concrete everything – to take the urban standard and plonk it into the bush. But New South Wales is covered in fire trails and bike tracks that you can tackle by thinking outside the box. The challenge is to find them.”

It was out of frustration that Smith emailed Matt McClelland (BLeisure&Hlth ’00), producer of online bushwalking guide Wildwalks and activities manager with National Parks Association of NSW. She wanted to know if he could recommend any more challenging tracks.

Instead, McClelland suggested they start a project together. With funding from the Department of Family and Community Services, they developed Naturally Accessible, a new approach to accessible bushwalking that emphasises information rather than infrastructure. Online track notes provide details about conditions, terrain, facilities and likely barriers along the way. “It’s about moving away from saying this track is or isn’t accessible, and instead giving enough information so the user can make their own choice,” explains Smith.

The system is useful not only for people who use wheelchairs but for anyone with mobility challenges, from parents with prams to people with heart or lung conditions. The project has been so successful that last year Smith won a prestigious Churchill Fellowship, which supported her on an eight-week trip to Canada, the US and Europe to share the Naturally Accessible framework and research other ways to make outdoor life more accessible to everyone. 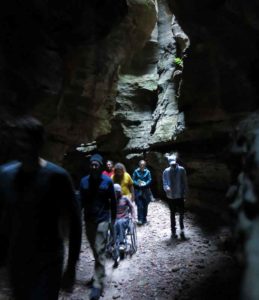 Despite this success, Smith’s original passion to work in conservation kept tugging at her heart. So, when an opportunity came up in Canberra with the Department of the Environment and Energy, she decided to take it. In June this year she started work as an Australian Science Policy Fellow under a new program that employs research scientists in government departments to improve and update policy.

Having been in Canberra only a few weeks, Smith’s routine already includes pushing herself to work in her chair and doing circuits around Lake Burley Griffin, and she’s planning to join a local outrigger canoe club. It’s all training for her next big adventure: a 250-kilometre journey along the Camino de Santiago, an ancient pilgrimage route that winds its way through various parts of Europe.

Smith and her friend Lisa Edmonds, who also uses a wheelchair, plan to push through coastal villages, farmland, forests and vineyards from Porto in Portugal to Santiago de Compostela in Spain, blogging about their trip along the way. While they’re expecting to encounter mud, stairs and steep slopes, “my hope is that we’ll be moving through some wine country, too,” says Smith with a smile.

But the trip, supported by a grant from women’s adventure magazine Travel Play Live, isn’t just about fun, she adds. “We want to show what’s possible with a bit of innovative thinking – to show that wheelchair users want better access to natural places and are willing to push to the extremes. It’s one of life’s great pleasures to do the things that people think you can’t.”

Smith is a keen blogger. Find out more about her current activities by reading her blog Pushwalk.