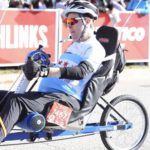 Four years after life-changing accident, he’s back in the race

Jake Anderson is a competitor. A captain of the Chanhassen boys hockey team in 2011-12, he scored 10 goals, helping the Storm to its best finish in program history with 20 wins.

Sitting on the sidelines, or bench in hockey terms, has never been Anderson’s thing.

He wants to be a part of the action.

He had to find a way.

Anderson, left a quadriplegic in a 2014 diving accident, the start of his junior year at the University of Wisconsin-Madison, called on his faith, resilience and courage.

Sept. 23, 2018, four days shy of the four-year anniversary of the accident, 13 miles in the rear view riding a constructed handcycle tandem bike with college friend Alex Gunn, the finish line was crossed.

The mindset “I can’t” left in the dust.

“Crossing the finish line, I heard a ton of family, friends, encouraging me, cheering me on. It was a pretty special moment,” Anderson said.

Madison college friend Gunn approached Anderson in 2015 about getting together a group for the one-year anniversary of the accident. Raising funds for Anderson and for spinal cord research development.

Team JandyStrong took the Chicago Half Marathon course with around 30 or 40 members that first year.

“I was naive to think it would be that easy,” he said.

Several handcycle trials left Anderson frustrated. He was unable to operate them independently. Balance and steering among the most difficult challenges.

Other ideas came about. Could Anderson ride in a three-wheel jogging stroller, pushed by a friend?

So he and friends Julia Moran, Atul Anand, and Peter Hefty, put their heads together, creating a senior project in their mechanical engineering field at UW-Madison, to design a handcycle to suit Anderson’s abilities.

“The real goal was how would we get me from start to finish and physically participate,” Anderson said.

With only $200 to work on the project, the group was able to secure a donation from TerraTrike, a model named Rover. The result was a tandem cycle powered by Anderson’s arms — he has movement in his shoulders and biceps — in the rear position of the bike, while the captain up front controls steering, braking and partial power input.
THE ADVENTURE

Anderson met Gunn at his Madison fraternity. A mentor-like figure. It was Gunn who developed the idea of the Chicago Half-Marathon event.

The goal was to raise $20,000 for continued medical care and nonprofit spinal cord advocacy. Each year, that number has been reached and exceeded.

Roughly $15,000 was donated to two organizations, split among Get Up Stand Up to Cure Paralysis and Unite 2 Fight Paralysis, this year alone.

“I told Alex I hoped to be more involved,” said Anderson. “I saw potential not only making a difference for me, which it certainly has, but also for others by expanding our impact in helping research that is cultivating these new advanced therapies.”

Including rides in the Lake Riley Chanhassen neighborhood, Anderson had roughly 25 miles or so of practice on the bike into the race.

“It was a mad scramble race day to get us out on the course. A guy was yelling ‘We got to go!’ The last thing we did was put the flags on and we hit the course. We were ready to go,” Anderson said.

The course, on Lakeshore Drive off Lake Michigan in Chicago, is split in half, the race down the highway, a turnaround, then back up the other direction.

Often times they passed other members of Team JandyStrong, echoing words of encouragement to one another.

“I felt what I set out to feel like after the race. I was exhausted. I felt like I competed as hard as I could,” Anderson said.

“I kind of feel like it’s come full circle with Alex starting the event, me wanting to participate in the event, gearing toward a tandem idea, and then him helping from the front. It’s a microcosm of everything that we’ve worked for these past four years,” he added.

Having graduated from Wisconsin this summer — he participated in the ceremony last spring, finishing up six credits this summer — Anderson has returned home, on the job hunt for now.

He looks to the five-year anniversary of the accident, the fifth year of the marathon event, for something bigger.

“We’ll see with my progress in terms of therapy. I’d like to continue and try some of these standard handcycle units. Maybe something with electric assist. And shifting gears or braking with a sort of contraption I can control with my head or my mouth so I can do this on my own, Anderson said.

“Hopefully down the road, with the advancements in technologies and therapies, run the race someday,” he added.

One of Jake Anderson’s missions as a quadriplegic is advocacy for spinal cord injury research. A Team JandyStrong event at the Chicago Half-Marathon in September raised nearly $15,000.

Two organizations close to Anderson’s heart are Get Up Stand Up to Cure Paralysis and Unite 2 Fight.

It was GUSU2Cure (https://www.gusu2cure.org) that fought for a start for spinal cord and traumatic brain injury research, securing $1 million in 2015 from the State of Minnesota. The funds were split 50/50 among the two fields.

In 2017, funding was increased to $6 million. Anderson aided in the effort, speaking in spring 2017 to the Senate House of Higher Education committee about his experiences as a quadriplegic.

Unite 2 Fight Paralysis (https://u2fp.org), which began off the work of GUSU2Cure, is looking at research funding at a national level. Work is being done in more states to match what is happening in Minnesota.

“The hope is we can address this at the national level. We are hoping that we can get more states on board. It’s quite an underfunded field of study by the National Institutes of Health compared to other diseases and injuries,” Anderson said.