Helping Hands teaches Needham students about safety, with the help of a monkey 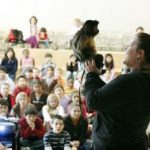 Needham – Marie Waitkevich is trying to talk seriously about the importance of wearing a helmet, but a small monkey keeps banging a walnut on the table behind her, eliciting shrieks of laughter from her audience.

“Not all monkeys eat walnuts this way,” she told her elementary school audience. “Lindsay is particularly good at opening them up.”

Lindsay, a 14-year-old helper monkey, is nearly ready to graduate from Monkey College, where she is being trained to serve as a personal attendant for a severely disabled recipient. She took a break from her studies last week to visit the Eliot School to help Waitkevich, a veterinarian technician at Helping Hands, teach students about disabilities.

The presentation, which kept students at rapt attention for 45 minutes, kicks off an annual Disability education program at the Eliot School. Last year’s program launched with a visit by Travis Roy, a legendary Boston University hockey player whose Vertebrae were shattered after only 11 seconds on the ice.

“People with disabilities are the same as you and me; they just might need a little more time to do something or need a little more help,” said Karin Peirce, a member of the Needham Commission on Disabilities, which partnered with the Eliot School PTC to sponsor the event. “It just helps kids to realize there’s nothing to be afraid of.
“Something like this, they’ll never forget,” she said.

Then came Lindsay, acting a little shy and wearing a green diaper, in case the crowd of giddy kids frightened her. Normally, Lindsay and her classmates would use special toilets in their cages.

Lindsay wandered the stage on a long leash as Waitkevich talked about Helping Hands, the only organization in the country to breed, train and place helper monkeys at no cost to their recipients. The Boston-based nonprofit has placed 127 monkeys since it was founded in 1979.

The monkeys, Waitkevich explained, can do many tasks, such as changing a CD or fetching a book, which would be impossible for someone with a severe spinal-cord injury.

“The difference between your dog and our monkeys is you might have a dog that’s really smart and can go fetch the paper at the end of the driveway, but can he put it back?” she asked the students. “Our monkeys can fetch things, bring them to us and then they can put them where they go.”

But Waitkevich, who has raised several monkeys in her own home, knows firsthand how quickly the monkeys learn. She told students about a time when she was taking down wallpaper in her house so it could be replaced. She came back later to find that her monkeys, who had watched the whole time, had taken the new wallpaper down as well.

“You have to be careful what you teach them,” she said.

Recipients communicate with their monkey with a laser pointer, which they use to indicate the object the want or the task they want the monkey to perform. As cool as the monkeys are, the point, Waitkevich said, is that nobody should ever want to have one.

“While giving a [quadriplegic a] monkey brightens their life, and makes their life a lot better, it’s something I hope none of you ever have to have,” she told the Eliot School students.

Waitkevich told the students to avoid a spinal cord injury by wearing a helmet while skiing or biking, and putting their hands in front of them when diving into a lake or shallow pool.

“There are many things you will do, day in and day out, that will put you at risk for a spinal cord injury,” she said.

Waitkevich also talked about the isolation the disabled can experience after an accident, when friends and family begin treating you differently. She told the students they should treat the disabled like anybody else.

And despite the fun of having a monkey in school, students said the got the message.

“She gave a lot of information about what it would be like to like if you had a monkey and you were disabled,” said 10-year-old Teddi Shapiro.

“I have never broken a bone and I don’t want to,” said 9-year-old Tiffany Perryman.

“The intention of the educational component is to capture the kids’ interest with the monkey, but also to talk to them about safety and disability awareness, and the types of injuries that can happen to kids their age,” she said.