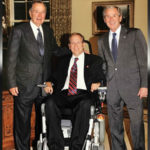 WASHINGTON, D.C. (WPRI) — As thousands made their way to the Capitol on Tuesday to pay their respects to former President George H.W. Bush, so did beneficiaries of the Americans with Disabilities Act.

President Bush signed the ADA, which is a civil rights law that prohibits discrimination based on disability, into law in 1990.

Congressman Jim Langevin says the Americans with Disabilities Act has made a great impact on his life. Langevin will be attending Bush’s funeral in Washington D.C. Wednesday morning to pay his respects.

“President Bush was the one who brought down the big barriers, and opened up those doors wide so that people with disabilities, myself included, could go through those doors that otherwise in the past had been closed,” Langevin explained. “He recognized that disability has no political affiliation. It can affect anyone, or any family, and it certainly affected me and my family in an unexpected way when I became paralyzed.”

At the age of 16, Langevin was injured while working with the Warwick Police Department in the Boy Scout Explorer program. A gun accidentally discharged and a bullet struck Langevin, leaving him paralyzed. He later went on to become the first quadriplegic to serve in the U.S. House of Representatives.

In 2008, Congressman Langevin joined President George W. Bush and his father in the Oval Office as they signed the ADA Amendments Act, a response to a number of decisions by the Supreme Court that had interpreted the original text of the ADA, into law.

“I had the opportunity also to say to George Herbert Walker Bush how much I appreciated his signing the ADA into law,” Langevin told Eyewitness News. “How it affected my life, and how it is very possible that had that bill not been signed into law that I might not be serving in Congress. I’m grateful for his leadership.”