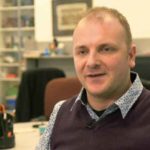 Before a devastating rock-climbing accident paralyzed Michael Garton from the neck down, he never thought he would be trading in carabiners for test tubes.

But when he went back to school for a degree in Chemistry, he surprised himself. Working on the cutting edge of science felt similar to scaling the edge of a cliff, he said.

“I fell in love with the exploratory nature of it,” the U.K.-born professor told CTV National News. “Finding out new stuff, exploring new things — it was a similar feeling to when I was out in the mountains climbing.”

Now Garton is bringing his research to Canada. Garton was given his own lab at the University of Toronto for his work exploring a new field in medicine in which scientists engineer cells to treat disease. One of the first projects in his lab will be to treat arthritis pain caused by inflammation. Garton would take cells from the arthritic area, alter them to sense the inflammation and respond to it, then put the revamped cells back in.

Garton’s transformation began after a moment of harrowing danger. His climb up the Troll Wall in Norway was supposed to mark a major personal accomplishment — the first solo ascent up the wall. Instead, two days into the climb he fell 120 feet down the rock face. He broke his neck and was left hanging from his ropes for 10 hours.

“It was a very surreal experience,” he said. “I just lay there upside down looking at this incredibly beautiful, serene mountain landscape just thinking I am going to die in the next few hours.”

He was in a state of severe hypothermia and had slipped into a coma by the time he was rescued by a Royal Norwegian air force helicopter. It was the most dangerous rescue the team who saved him had ever done, Garton was told.

That team and the doctors who helped him recover in hospital were inspirations for his next step. “I sort of felt this debt to them to do something more meaningful,” he said, though he wasn’t always so positive. “The main feeling that you get when you wake up totally paralyzed is that everything from your life is stripped away… You have to start life from zero,” he said.

But when he came to terms which his condition after a few months, his view became more optimistic: “It was sort of like I had a blank slate in which to go whatever direction I wanted to,” he said. So he decided to use “the only thing left working” — his brain — and go back to school. Garton was always good at science and pursued a master’s degree and then a PhD in computational biology at the University of Nottingham.

Today he’s targeting arthritis, heart disease and various inflammatory diseases with the progressive science of re-engineered cells that could be administered as “one-off therapies” possibly in the form of an implant under the skin. “Because it’s your own cells it won’t be rejected by the immune system,” he said. “This thing will just sit in there and be able to detect the disease and deliver a therapeutic response.”

And his disability helps him in a way. “As a quadriplegic you are constantly solving problems,” he said. “It is a daily situation for me.”

The decision to give Garton his own laboratory and support staff was a unanimous one, said Warren Chan, director of the Institute of Biomaterials and Biomedical Engineering at U of T, and the scientist who hired Garton.

“His ideas are very different. If it does work it has a huge impact on Canadians, and globally,” he said. “This is the kind of people that we’re trying to bring into the Institute. They’re pushing the boundaries of science.”

It’s not rock climbing, but the new work is even more thrilling for Garton. “Becoming an explorer seems very exciting, but I think working on curing disease is vastly more exciting actually and rewarding,” he said.

His goal is to reach a different summit. “I’d say that my goal in life is to have some real world impact on disease, to be able to look back on life and say there are people living or not suffering as a result of the work I have done,” he said.

CTVNews.ca staff, with a report from Avis Favaro and Elizabeth St. Philip