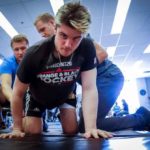 CALGARY — Paralyzed Humboldt Broncos player Ryan Straschnitzki is on his hands and knees trying a skill he hasn‘t had to practise for 18 years — how to crawl.

Straschnitzki, with the assistance of two physiotherapists, is being shown how to keep himself upright on his arms and how to move his legs forward, a few inches at a time.

With three full months of rehabilitation under his belt, Straschnitzki has been focusing on the future and not what might have been. He was paralyzed from the chest down when a bus carrying the Humboldt Broncos junior hockey team and a semi-trailer collided in April in rural Saskatchewan.

Sixteen people were killed and 13 were injured.

“Everyone struggles at some point in their life, but it‘s how you overcome it that matters. I‘m here now because I worked hard then,” Straschnitzki said.

“I like to keep the positive mentality and hopefully walk again some day because of it. I‘m here to inspire people and tell them it‘s not over.”

Part of his enthusiasm comes from his long-term plan to be a member of Canada‘s national sledge hockey team and get a shot at participating in the Winter Paralympic Games. In sledge hockey, players use double-blade sledges instead of skates that allow the puck to pass beneath. They have two sticks which have a spike-end for pushing and a blade-end for shooting.

He‘s already been on the ice a number of times and is training for a fundraiser in Calgary next month.

“I‘ve gotten stronger. I think I‘ve gotten bigger. Sledge hockey seems a lot more easier than it should be. It‘s all thanks to these guys,” he said.

“It makes me happy to be here knowing that I‘m working toward a big goal of some day playing for Team Canada but, for now, I‘m just having fun on the ice and enjoying my time here and working hard.”

Straschnitzki underwent therapy at Foothills Hospital in Calgary before spending a month at the Shriners Hospital for Sick Children in Philadelphia.

“In the month that Ryan‘s been here, probably one of the most substantial areas of improvement that we‘ve seen is in his core and his trunk stability. He can see it makes a big difference in his sledge hockey. He‘s able to manoeuvre and control a bit better,” said Uyen Nguyen, executive director and founder of Synaptic Spinal Cord Injury and Neuro Rehabilitation Centre.

“In neuro rehab, a month is actually not a whole lot of time, so for us to see any change or progress is really encouraging.”

Nguyen said Straschnitzki was working hard at rehabilitation but, since he started playing sledge hockey, he‘s stepped it up.

“What I really admire and respect about Ryan is he doesn‘t lament about what he‘s lost,” said Nguyen.