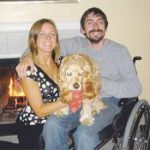 The former New Jersey resident and computer programmer was injured in August 2005 when he mistakenly dove into shallow water near Rehoboth, Del. The impact damaged his spinal cord and after doctors rushed to treat the man, they told him not to expect ever moving anything below his shoulders again.

“I was told in a meeting with my doctors to get used to life in a wheelchair,” Robert Wall said in a phone interview. “But I found out that if I wanted to get out of this chair, I had to get my body in motion.”

One year after beginning a new form of spinal cord treatment therapy that focuses on exercise and body movement, Robert Wall can hold himself independently in a standing position for 20 minutes. When his annual charity fund-raiser event, Run for Robbie, makes it way to Northern Virginia next month, Robert Wall plans to walk — with the assistance of crutches — into a reception to greet the participants.

“People have been really excited about it, it’s amazing to see all these people coming together,” he said. “Whenever you have a lot of people working towards the same goal, you’re going to get something good from it.”

THE FUND-RAISING event, which includes a 5K run in Manassas and a benefit dinner in Sterling, looks to collect about $50,000 to continue Robert Wall’s Rehabilitation treatment in Southern California, which is not covered by his insurance. The first run, held in New Jersey last June, raised about that much money.

The annual event was relocating to Northern Virginia as Mandy Wall, his wife of three years, is a native of Reston and grew up in Herndon and Sterling. The couple plans on permanently relocating to the area following the completion of Robert Wall’s treatment next year at Project Walk international spinal cord injury recovery center “We’re coming here soon, so we wanted to get the fund-raiser established,” said Mandy Wall, a 1996 graduate of Park View High School in Sterling. “We have a lot of really great people who are close to us in the area and we want to take this opportunity to meet more people.”

And while the first Northern Virginia run will be used to raise money for Robert Wall’s continuing treatment, the couple plans on having similar future fund-raisers to benefit other area residents with spinal injuries looking to undergo the treatment.

“Since I started this treatment, with the results that I’ve had and the things that I’ve learned, I’ve just been in absolute awe,” said Robert Wall. “I’d love to see people with spinal cord injuries … have this same experience and we’re looking at finding out ways that we can do that.”

REJOINING HER FAMILY and friends in Northern Virginia with the shared goal of supporting her husband’s condition as well as the conditions of others will be a strengthening experience, Mandy Wall said.

“We all know what happened to Christopher Reeve, but you don’t really know until you’ve lived it on your own,” she said. “Having everyone around and working to increase awareness not just about the injuries but about the lives of the caregivers, I think will be great.”

And bringing not just awareness of the condition, but of the Project Walk style of rehabilitation to the area will work to benefit anyone who learns of the Run for Robbie event, said Mandy Wall’s mother, Eileen Hare.

“How can it go wrong? It can really only help anyone with injuries,” Hare said. “These people they look at you and say that if you can wiggle your toes, we can make you walk.”

Most of all, the prospect of joining together to help the family of a native community member has garnered the support of Leesburg resident Carrie Dominguez. Dominguez, a cheerleader with Mandy Wall at Park View, is running in the event and sponsoring its T-shirts.

“I think it’s just going to show that just with something small, like a run, it can really pull people together and it can make a big difference,” she said. “Even though this was a very tragic thing two years ago, I think in the long run when we see everyone who cares coming together … and to see how far he’s coming, I think will be very inspirational to a lot of people.”

Preregistration fees are $20, with same-day registration available for $25. The Robbie Wall Benefit Dinner will be held that night at 6 p.m., at Joe’s Italian Restaurant in Sterling, with registration costing $45 per person. Registered runners are welcomed to raise money on top of their registration from sponsors, with those residents who raise $300 or more will receiving free entrance to the dinner. For more information or to register, visit the Robbie Wall fund-raising Web site at www.supportthewall.net or e-mail Eileen Hare at booper52@rstarmail.com. Donations can be made out to “The Robert Wall Benefit Fund” and sent to 14658 Nina Court, Waterford, VA 20197.