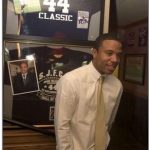 It’s been a long, steady climb for Adam Taliaferro since that fateful September day in 2000 on the football field at Ohio State University left him paralyzed.

The former Eastern High School star — who was a freshman at Penn State when the injury occurred — overcame the odds and fought his way back to walk upright once again.

On Monday evening, right across the road from Eastern, Taliaferro, 25, was honored as Applebee’s Hometown Hero. The same Applebee’s he has frequented so many times over the years now has two framed Taliaferro jerseys and other memorabilia, such as a Penn State playing card and photos of Taliaferro, displayed on its walls.

Proceeds of 10 percent of certain customer’s checks on Monday went to the Adam Taliaferro Foundation — which has raised more than $200,000 for athletes with spinal cord injuries — and Taliaferro also had a signing for his book, “Miracle in the Making.”

Taliaferro got a huge hand from the many customers in the restaurant when he was presented with a plaque and announced as the Hometown Hero.

“It’s just special for me, I grew up in Voorhees, I’ve been coming here since I was in high school,” Taliaferro said. “I remember coming here and seeing the different jerseys and pictures they had on the wall, to see your own stuff up there is just, man . . . I’m really thankful to Applebee’s for doing that. They didn’t have to do that.

“All the people that have been involved and supported me, I’m just humbled and thankful. It’s been seven years since my injury, for people to still care is real special.

“I never expected to have a book about my injury and recovery, but I think it’s just good for those who have been injured to see and kind of read about what I’ve been through and let them know it can be done, you can overcome a spinal cord injury. I just hope it serves as an inspiration to some people.”

Taliaferro was paralyzed on Sept. 23, 2000, while playing cornerback for Penn State as a freshman. He made a head-first tackle of an Ohio State player and fractured the C-5 vertebra in his spine. Less than one year after the injury, he was able to run out onto the field with his teammates, although he never played in a game again.

“It’s probably one of the toughest things I’ve seen happen, I remember it very vividly when it occurred in 2000,” said Eastern football coach Dan Spittal, who was there to support Taliaferro on Monday. “The thing I remember about Adam the most coaching him in high school was his work ethic. Typically kids of superior skill like him kind of glide by. But he had a great work ethic. That’s why he had such a great senior year.

“I knew his work ethic. So I knew if he could get better by hard work, he could do it.”

He walks with a slight limp and his right hand doesn’t completely open, but Taliaferro is clearly a long way removed from that traumatic injury. He has one more year of law school left at Rutgers-Camden and recently started his summer job with Montgomery McCracken law firm in Philadelphia.

“This is my second summer there, hopefully after this summer I’ll be able to work there full time if my work is up to their standards,” he said with a smile.

You get the feeling that his work will be more than up to standard.

“His name came about and a few of us talked about it and within a minute we decided that he was the one to definitely be the Hometown Hero and we’re very excited,” said Steve Soprano, the Applebee’s general manager. “We used to honor them with just a picture, but now we give them a whole wall. Companywide we do them all the time, but this one here, we’ve only done two or three.

“That will stay up there permanently.”

Jason Cole, the vice president of the Adam Taliaferro Foundation, said the night was an Applebee’s creation.

“They contacted us acknowledging they wanted Adam to be recognized as their local Hometown Hero, Adam was honored,” Cole said. “We decided as well we’d have Adam sign some of his books to raise awareness for the foundation and Adam’s story.

“We’re really trying to build awareness to spinal cord injuries in the Delaware Valley, specifically in South Jersey. We’re trying to get the word out, we’re trying to do as many events as possible.”

Spittal said the honor will show a lot of people that even though some bad things can happen to you in your life, you can overcome it “by being positive, working hard and having the support of your family and friends around you.”

Taliaferro couldn’t agree more. “It’s just very satisfying,” he said. “My therapists, they busted my butt everyday. Just to see the results of all that hard work pay off really makes you believe that through hard work you can achieve a lot of things. It taught me a lot about myself that sometimes things may seem impossible, but through hard work, you never know what you can accomplish.”

A quadriplegic patient used prosthetics to feed himself. His brain was...