Super wheelchair for Rockport man made possible by community 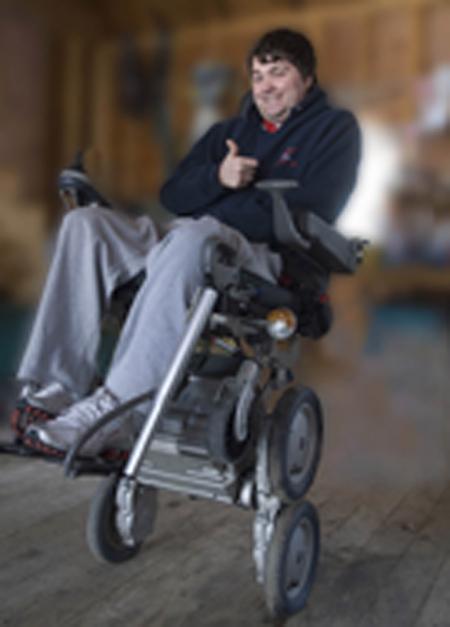 WEST ROCKPORT — The family of Derek O’Brien reports that a fund-raiser held in April produced enough money to allow them to order a $26,000 super wheelchair for him, a piece of equipment which is expected to greatly increase his ability to get around and look after himself.

Derek O’Brien of West Rockport tries out a demonstration model of a super wheelchair his family is buying, with money raised by members of the community.

When we received the telephone call on July 23, 2005, telling us that Derek had sustained a spinal cord injury in Ocean City, N.J., we had no idea of the long journey that was ahead of Derek and our family. The days turned into weeks, the weeks turned into months, the months turned into seasons, and the seasons have turned into nearly two years of obstacles and challenges.

When the accident happened, this community immediately went to work to raise money to help our family with medical and travel expenses.

The first fund-raiser put on with the help of Colleen and Mathew Ingraham of McMahon’s and many, many other people, was a huge success, but it did not stop there. The community continued to show it’s support with car washes, raffles and donations.

After one year away from home, Derek and I were able to return home to our family and friends. This past year has been a lot of work for Derek doing continuous therapy and trying to fit back in to society.

The Dip for Derek on New Year’s Day not only brought financial support, but also opened up a new door for Derek. Just by chance, Mark Wallack took a picture of Derek at the event. When he delivered a copy of the photo to our home, he met Derek and learned of Derek’s previous love of photography.

Mark has made a huge difference in Derek’s outlook on life now. With Mark’s help, another fund-raiser was launched to obtain a new camera and photography equipment to get Derek back out in the community to take pictures. Everyone was so generous once again. Mark continues to work with Derek and has given him something to look forward to doing.

When Derek found out about a new wheelchair that would allow him to climb stairs, get over curbs, go over rough terrain, reach things on shelves, and be able to talk to people eye to eye, it was Mark Wallack who again came to the rescue. Within days a committee was formed and the fund-raising began to obtain the wheelchair.

The “Wheels for Derek” fund-raiser was held on April 28. It was a huge success and the wheelchair has been ordered.

The O’Brien family would like to thank the Rockland Elks Lodge for the donation of the facility, the Oliver Sudden Band, Bruce Gamage, the auctioneer, all the people and businesses who donated items for the live and silent auction, and Nate Lammi for printing the T-shirts.

We especially want to thank the committee consisting of Monica Tolman, Lyn O’Hara, Victoria Bryant, Melissa McCoole, Elise Marshall, Erin Flanagan, Judy Emery and Mark Wallack. They all worked very hard to put on such a successful fund-raiser. Of course it would not have been successful without all the friends, family, and even people Derek did not know who attended and made donations.

Derek’s Journey has been long and hard, but without the help and support of this community, he would not have gotten this far. We are so thankful that we live in a community like we have. From the bottom of our hearts we thank you for being there to help us get through this and help Derek find a new path in life.

Scientists Meet in Louisville to Share Research That Could Improve Treatments...