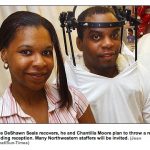 After dating for more than three years, DeShawn Seals and Chantilla Moore planned on tying the knot on Valentine’s Day.

Three days before the couple were about to start their new life, Seals nearly lost his. He almost died in a Feb. 11 car crash.

The Chatham man woke up the next morning in a Northwestern Memorial Hospital ICU bed with a spinal cord injury that left him unable to move his arms and legs. His spinal cord wasn’t severed. But it was damaged enough to mean the best case scenario would be months of Rehabilitation, learning how to use his limbs again.

Seals’ fiancee insisted on becoming his wife, whether he could walk again or not.

Seals was in no condition to go anywhere, so Northwestern staff members brought the wedding to him. They found a makeshift veil for Moore, bought a raspberry wedding cake and passed out cups of cranberry juice for a toast. The couple’s minister married them in the hospital on Valentine’s Day.
Hospital workers signed their names in the Bible and gave it to the couple. They attached a “Just Married” sign to Seals’ bed, which prompted congratulations from onlookers.

Findings offer potential significance to the recovery of walking after spinal...