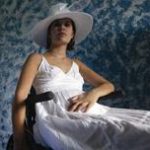 She saw a passing trucker put out the fire, peering in at her in the back seat every few moments to ask whether she was still alive.

And she saw paramedics surrounding her inside a hospital-bound helicopter.

Przenkop (pronounced Pra-ZEHN-kop) has dark blue eyes and perfectly straight dark hair that stops short of her shoulders. She wears fashionable hats and likes to work on her tan on the weekends.

She has been paralyzed from her chest down since that early September morning on Interstate 95 just south of Gatlin Boulevard.

Her family’s attorney, Gary Dickstein, said the Przenkops have not accepted a settlement from the driver’s insurance company. The crash investigation remains open.

A Florida Highway Patrol report says this is what happened: Johnny O’Neill, 20 at the time, was driving his 2006 Acura at about 100 mph, with 17-year-old Tatiana Romero in the passenger seat and Przenkop in the back seat, when he lost control.

He crashed into an abandoned Chevrolet van parked on the shoulder and began spinning. When the Acura stopped, it flung O’Neill onto the roadway and caught fire, with Przenkop and Romero trapped inside.

Six months later, 18-year-old Romero has moved out of state and 21-year-old O’Neill could not be reached for comment.

Florida Highway Patrol Lt. Tim Frith said medical staff drew O’Neill’s blood at the hospital, about three hours after the accident. Investigators now have to rely on experts to help calculate alcohol’s burn-off rate and to determine whether any drugs given to him at the hospital tainted the reading.

O’Neill could face one count of reckless driving and two counts of driving under the influence with serious bodily injury, Frith said.

Przenkop and Romero also could face charges related to fake IDs found at the scene, Frith said. When investigators tried to contact the girls’ families, they followed a fake ID straight to someone else’s parents.

The group was heading back from a West Palm Beach nightclub shortly after 3 a.m. when O’Neill hit the van. Przenkop had told her mother she’d be at a high school party.

The Port St. Lucie High School senior spent the next month in the intensive-care unit at Holmes Regional Medical Center in Melbourne. She remembers vivid dreams while on pain medicine. In all of them, she was walking.

From there, she headed to an Atlanta spinal cord injury center for three months. For the first two, Przenkop could barely speak, but she made friends with other teenagers with similar injuries and learned what she can do for herself.

With her thumb and pointer finger, she can type and put on makeup. She rides the handicapped bus to school, and a classmate takes notes for her.

When her legs spasm – and they do often – friends know how to hold her feet and legs until the shaking stops.

Przenkop’s parents took down her kickboxing bag the other day, the same day she saw some old friends at school.

“They just looked at me and looked away,” she said, shrugging.

But Przenkop doesn’t feel sorry for herself.

She holds onto a letter from a recruiter that says she is “permanently medically disqualified” from the Navy. She has a new plan.

Since she can’t feel pressure on her bladder, she wants to get a Catheter that will keep her from worrying about accidents. Then she wants to take the money she’d saved for a car to buy a van that she can load her wheelchair into and drive with hand controls.

She wants to study psychology at Indian River Community College and work part time so her mother can go back to work.

Carol Przenkop quit her job at Hibiscus Children’s Center in Vero Beach, where she worked nights. Now she wakes up during the night to move her daughter so she doesn’t get bed sores, and she’s back up at 4:35 a.m. to help the girl get ready for school.

Przenkop’s father, John, is a retired Delta mechanic. He built a wheelchair ramp at the front door. When the family goes out, he dissembles his daughter’s wheelchair and packs it in the back seat with his wife. Then he carries the girl to the front seat.

“We don’t have a van. We have a Mustang,” Carol Przenkop said.

Their daughter knows a handicapped van is the key to her independence, but she has more immediate needs.

Her injuries leave her Prone to infection, which means finding more doctors. Her parents want to get her back into Physical Therapy, but that, too, seems secondary.

Przenkop hasn’t had a proper shower since Jan. 5, when she came home from Atlanta. Her mother calls and calls about getting a special chair to use in the shower, which remains on back order.

The wheelchair her aunt bought her hurts Przenkop’s shoulders because she has to push herself.

“If I don’t have an electric wheelchair, I’m not going to go to a university,” the girl said.

She says she let herself stay depressed for only four days when she got back from Atlanta.

Now she exercises every day and spends weekends out with her friends. Her appetite is back to normal.

She’ll be 18 next month. She’s ready for college, for work and for moving on.

To help pay for expenses, the Przenkops have an account set up at National City bank: Account No. 13402979 Tiffany Przenkop irrevocable trust.