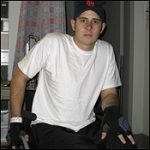 BOSTON, Mass. – March 09, 2007 – A soldier who was discharged from the West Roxbury VA hospital before Thanksgiving is still waiting for the Army to discharge him. Sergeant Chase Gean needs those papers to start collecting his disabled veterans’ benefits and continue his rehabilitation.

The holdup is at Walter Reed Army Medical Center in Washington, where doctors make decisions about whether soldiers should be discharged. WBUR’s Fred Thys interviewed Gean just before he was released from West Roxbury VA last November, and now has the story of what’s happened to him in the months since.

FRED THYS: Just before Thanksgiving, Sergeant Chase Gean was learning how to get back into his wheelchair from the floor. He sat on a step like the ones you see in aerobics classes, and just using his arms, pushed himself up into the chair.

FRED THYS: Chase Gean was paralyzed from the waist down when he was on patrol in the mountains of Aghanistan, near the border with Pakistan. Just as the sun went down, his patrol was shot at from three different sides.

CHASE GEAN: I was the first one to get shot. I got shot in the back, and it hit my spine, and immediately my legs went numb. So I felt around. I felt the bullet hole in my back.

FRED THYS: Four months after being released from the hospital, Gean and his fianc?are living in Colorado. Once Gean’s rehab at West Roxbury was over, he was only able to leave Boston because a benefits advocate paid six thousand dollars in expenses out of his own pocket. The rehab sessions at the West Roxbury VA Hospital were the last Chase Gean has had. His mother, Liz Hinsley, says Gean wants to start rehabilitation at a civilian hospital, Denver’s Craig Rehabilitation Center, famous for its work spinal cord injury patients.

LIZ HINSLEY: He feels–we do, too–that they will do some very aggressive therapy, and where I think we’re going to see the results, but right now, I believe, talking to Chase, that he’s kind of in limbo with that.

FRED THYS: Gean is hopeful that the VA will pay for the rehab, but the VA can’t pay for anything until he gets his discharge papers from the Army. He is constantly on his cell phone, trying to track down his status. The holdup is at Walter Reed Army Medical Center, in Washington.

FRED THYS: An Army spokesman says in order to protect the privacy of patients, it cannot comment on specific cases, but the spokesman says paralyzed soldiers are not treated differently from other wounded soldiers. The Army says it takes time to make sure that a soldier is permanently disabled. But Gean doesn’t understand why Walter Reed has taken so long to figure out that he is permanently disabled.

Sergeant Gean’s Army paychecks are about 900 dollars every two weeks. Gean may be eligible to receive up to an additional 4200 dollars a month in VA Disability benefits.

EDWARD KENNEDY: The Army, specifically Walter Reed, lost track of him, resulting of lack of pay for the soldier and his families. We talked to Walter Reed. Paperwork was incomplete, leaving him in a troubling gray area, where he’s not on active duty, not officially discharged, and this is the situation that is being repeated, where people are being left out, and effectively dropped.

FRED THYS: Gean is clearly frustrated, and he just wants to get on with his life.

CHASE GEAN: I just want some kind of Physical Therapy, something. I don’t need to be not doin’ nothin’. I’m 26 years old.

FRED THYS: And the bullet didn’t sever his spinal cord, so he says, there could be something that comes back. Gean has nothing but praise for the medical care he has received, both at Walter Reed and at West Roxbury. His frustration is with the Army’s unexplained delay in letting him go, so that he can try to rebuild his body, and his life.