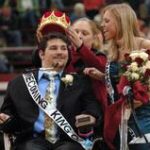 It’s good to be the king

The other students just stepped forward for their introductions as members of the Harrison High School homecoming court Friday night but classmate Ben Trockman was one up on them when his turn came.

Grinning big, Trockman spun his electric wheelchair around several times and waited with the others for the announcer to call the king and queen, chosen by a student vote earlier in the day. Trockman, 18, suffered a broken neck and spinal cord injury in a motorcycle accident last spring that left him with limited movement below the shoulders.

The halftime crowd at the Harrison-Vincennes Lincoln game went wild with applause for Trockman when he was announced as king. Flush with excitement, he faced the bleachers and blew the crowd kisses. Classmate Molly Wyman was chosen queen.

Trockman, who is the son of Jill and Vanderburgh County Superior Court Judge Wayne Trockman, suffered his injury on March 19, during a motocross event in Poole, Ky.

Jill Trockman said her son was a little concerned at first that if he was chosen it would be because he is in a wheelchair. But Principal Janet Leistner said Trockman has always been a popular and active student and that hasn’t changed.

She said the selection of Trockman as

homecoming king was in keeping with the class’s personality.

Trockman has been determined not just to recover physically but to enjoy his senior year. He attends three classes every day studying economics, English and science so that he can fulfill the credit hours he needs to graduate this fall.

“He wants everything to be as normal as possible,” Leistner said. “He just wants to be a high school student. He has a great attitude and studies hard.”

The rest of his days are spent in Physical Therapy. Jill Trockman said doctors expect her son to eventually recover full use of his arms.

Demonstrations of peer support, like being crowned homecoming king have played an important role in her son’s Rehabilitation, Jill Trockman said.

“When this first happened, he was afraid that people wouldn’t accept him for he is,” she said.

Trockman said he planning on attending college next year, like many of classmates, probably at the University of Southern Indiana. What is he planning to study there?

Facebook
Twitter
Email
Mix
Digg
Previous article‘Wheels in Motion’ money to buy signage
Next articleLove Bloomed, Despite Paralysis, After She Saved His Life