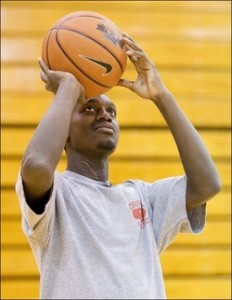 ITHACA — It has been a year since a collision on a basketball court changed Khaliq Gant’s life, and the lives of those closest to him, forever.

At first sight, nothing about Gant illustrates the ordeal he has been through to make it back to the Cornell University campus.

There’s no wheelchair. No cane. Not even a distinguishable limp.

He lifts weights regularly with his Cornell basketball teammates and looks more like an athlete rehabbing an ankle injury during workouts with trainer Marc Chamberlain than one returning from major spinal cord surgery.

The scars are the giveaway.

One runs along the front side of his neck, and one along the spinal column. Each is about a half-inch thick.

The scars serve as permanent reminders that the last 12 months have been an ordeal for the Cornell junior guard.

There are also indicators of the progress he has made.

“My first step made me realize I could get things back to normal,” Gant said.

That first step was taken at the Shepherd Spinal Clinic in Atlanta, where Gant spent seven arduous and frustrating months teaching himself to walk again.

The injury occurred during practice on Jan. 24, 2006, when Gant and several teammates collided in a rebounding drill. An alert Chamberlain ensured that emergency medical personnel arrived quickly to stabilize Gant, who was paralyzed and dazed but aware something was seriously wrong.

“I knew immediately,” Gant said. “When I couldn’t move or anything, I knew it was pretty serious.”

Gant was taken by Medivac to Arnot Ogden Medical Center in Elmira and listed in critical condition after tests determined he suffered a 50 percent dislocation of the C-4 and C-5 Vertebrae.

He underwent a complex seven-hour surgery three days later, in which doctors took bone from his hip to fuse the two dislocated vertebrae together.

A week later, he was staring a lengthy Rehabilitation in the face from his new home — a room at Shepherd. Doctors were unsure how much, if any, use of his arms and legs Gant would recover.

He quickly made believers of everyone.
The rehab
Since returning to the Cornell campus in August and resuming his role as a resident assistant, Gant’s strength has slowly improved. He has regained all but five pounds of the 30 he lost following the injury.

But the “victories” in his ongoing rehab come in small steps.

The latest came just a week ago, when he returned from winter break from his home in Atlanta.

“I look out and it was like his first day back,” assistant coach Zach Spiker said. “And he shot a bucket. He shot a layup. … That was a moment where I was like, ‘Wow. He’s covered a lot of ground.’ ”

That simple motion was a year in the making.

Upon his arrival Feb. 2 at Shepherd, Gant exhibited movement in his extremities but little else. Three weeks later, Spiker and head coach Steve Donahue flew down for a night and were stunned to watch Gant bend his elbows and hold himself up for several seconds before his strength inevitably gave out.

“It was awesome,” Donahue said.

So was the outpouring of support.

Hundreds of well-wishers sent letters, pictures and T-shirts, while numerous others posted messages to Gant on a special message board on the Cornell athletics Web site.

“It was amazing,” said Gant, adding that the letters sparked him to work harder. “It just warmed my heart that they cared enough to do that. Even guys I played against, you would think they wouldn’t even remember who I was. But it was nice to know that they cared and that they were following my progress.”
Back home: Team united
Four days after the injury, Cornell was due in New York for a Saturday matinee with Columbia. Unsure if his team was mentally ready to compete at a high level, Donahue let his team decide if they were going to play the game.

Gant gave the go-ahead, and that was enough.

“In some ways, maybe the best thing that ever happened was that we had a road game,” Spiker said. “The games gave us structure. They really did.”

And Columbia was drilled by an emotional freight train.

Cornell scored the game’s first eight points and routed the Lions, 81-59, sparking a four-game win streak. With Gant’s No. 21 stitched over the heart of each player’s jersey, as well as on Donahue’s red tie, the point was clear: They were no longer just playing to win.

Games were a crucial part of the healing process, not only for Gant, but also for his teammates and coaches.

“That made him smile, and that’s all we could really do,” said senior guard Kevin App, one of Gant’s closest friends. “That’s how we helped, and I’ll never forget that game. Walking down those stairs last year (at Columbia), it was great knowing we had won for Khaliq. I’ll never forget that.”

His progress was so encouraging — at that point, Gant could walk for short periods of time on his own — that the group started making plans for a surprise trip back to campus. They chose Slope Day weekend.

It provided the goal-minded Gant with yet another challenge to meet. He promised himself he’d be walking on his own for Cornell’s end-of-year celebration.

“If you don’t have milestones to measure your progress by, it’s hard to keep working hard.”
The journey continues
For the first time since he was a kid, Gant can’t play the game he loves.

“It’s weird,” he said. “I’m so used to doing the same things over and over, going to practice and playing. It’s weird just having to watch and sit out.”

Gant has trouble raising his arms above his head, and he also is focused on strengthening his body to the point where he can sprint again.

“Small stuff, but it still adds up to a lot,” he said. “I had a cane when I first got back up here, and I don’t have that anymore. I got tired a lot easier then, as far as walking goes. I felt a lot more unsure about my balance then I do now, which is nice. Walking up a hill, down a hill — it’s not as challenging.”

For Donahue, who visited Gant daily in Elmira and several times in Atlanta, the recovery has been a huge joy and relief to see.

“A great ending like this is so rewarding,” he said. “It’s really nice to be around, and the guys appreciate it. It’s just very gratifying. That’s the only way to describe it.”