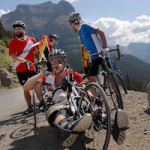 Joe Stone doesn’t recall much about the speed flying accident that sent him crashing at 50 miles an hour into the face of Missoula’s Mount Jumbo, putting him in a month-long coma, rendering him quadriplegic and nearly ending his life.

But more impressive than his unlikely survival was his resolve, which gripped him the instant he awoke from the dark maw of unconsciousness, to again venture forth into the mountains.

Stone, 29, of Missoula, will share his remarkable story and the adventures he’s embarked on at a presentation in Whitefish on Nov. 21, when he will premiere a portion of his new documentary, “It’s Raining, So What,” detailing his journey from near death to competitive mountain athlete.

On Aug. 13, 2010, Stone was attempting a kind of barrel roll when his canopy collapsed like a spinnaker and he plunged several hundred feet to the ground. Speed flying is a form of high performance paragliding, and the accident left Stone with eight broken vertebrae throughout his neck and back and spinal cord damage at the C7 level. He was diagnosed as an incomplete C7 quadriplegic paralyzed from the chest down with limited use of his hands.

Less than one year later, Stone became the first-known quadriplegic to hand-cycle Glacier National Park’s grueling Going-To-The-Sun-Road – a challenging accomplishment for even the fittest able-bodied athletes. It was after a 2,500-foot vertical climb, at the top of Logan Pass, that Joe felt once again that his life was truly limitless and set his sights on becoming the first quadriplegic to complete an Ironman triathlon.

The documentary, “It’s Raining, So What,” chronicles Joe and his fiancé Amy Rosendahl’s three-year journey from the terrifying moments following his crash to his accomplishments hand-cycling steep mountain passes and his performance in Florida’s IRONMAN triathlon in November 2013.

He’s determined to fly again one day, but in the meantime he’s becoming an expert at using adaptive equipment to pursue his outdoor passions, and has created a nonprofit organization, the Joe Stone Foundation, to help others who suffer debilitating injuries to do the same.

“I’ve received so much support that helped me get to where I am today, and trying to pay it forward through the foundation,” he said. “The documentary isn’t just my story, it’s other stories as well. The goal is to really give people the tools they need to apply to their own lives and help them overcome their perceived limitations.”

Stone points to the local program DREAM Adaptive Recreation as one channel of that support that has helped him overcome his own perceived limitations, and the upcoming event will serve as a fundraiser for DREAM, as well as his own foundation.

DREAM, an acronym for Disabled Recreation Environmental Access Movement, is a local nonprofit that provides summer and winter outdoor activities to children and adults with disabilities. The organization is in its 29th year, and had 650 participants in its winter programs last year, a 22 percent increase over the previous year.

Every day in the winter, children and adults with disabilities – both cognitive and physical – converge on Big Mountain seeking the opportunity to overcome their limitations through the DREAM program. Executive Director Cheri DuBeau is building the program to include year-round opportunities like rock climbing, biking, hiking and adaptive golf. Currently, there is the winter program and a three-day summertime program that offers water skiing.

The upcoming event is called “An Evening of Inspiration with Joe Stone,” and will take place Nov. 21 at the O’Shaughnessy Cultural Center in Whitefish from 6-9 p.m. Tickets cost $20 and the event includes beer, wine, hors d’oeuvres, a silent auction, and Stone’s 45-minute documentary, which in its finished version will be twice that length.

“We have been working on the documentary for more than three years and the full-length version is still in the works,” he said. “The idea behind the documentary and the foundation is to reach people from around different communities and bring awareness that we are just as capable as everyone else of performing these activities, but we are just doing it differently with a different piece of gear.”