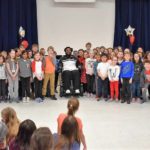 DENVILLE, NJ – Eric LeGrand stopped by Riverview Elementary School in Denville to share pearls of wisdom with its third, fourth and fifth graders on Wednesday, April 3. Approximately 200 students attended the assembly to meet the former Rutgers University football player who now is confined to a wheelchair due to a spinal cord injury he sustained in a game during his junior year at Rutgers.

“We invited Eric LeGrand because his message supports our service-learning project,” explained Riverview Principal Christina Theodoropoulos, also a Rutgers alumna. Riverview students are working on bringing peace to themselves and others by having a positive mindset. The acronym ROCKET describes the project’s objectives – be respectful, optimistic, compassionate, kind, empathetic, and a team player.

After dimming the lights to the multipurpose room, the presentation opened with a six-minute video about LeGrand. Upon its conclusion, LeGrand approached the microphone with assistance from his mom, Karen LeGrand, one of his greatest inspirations, and told his amazing and uplifting story. He sprinkled his guiding principles throughout his presentation.

Here are some of the tenets he imparted to his riveted audience, many of whom wore Rutgers gear as a sign of solidarity:

–Always keep your commitments. If you sign up to do something, then stick with it and see it through. This was one of LeGrand’s first indelible life lessons that he learned from his mother when he was 10 years old.

–Appreciate life because tomorrow is not promised to anyone. As he was recovering from his traumatic injury, LeGrand was blessed to do just that – recover. Others around him were not as fortunate. He witnessed some who died within hours of meeting them or others who passed away after he had developed months-long relationships with them.

–Someone always has it worse than you. Similarly, you never know what someone is going through at home. He contrasted his experience in the hospital and physical rehabilitation where he received lots of visitors and support from Rutgers University, family and friends to the experience of a fellow patient, two years his senior, who received nearly no visitors and ultimately died all alone.

–Each new day gives you a second chance at life, so embrace it with joy and positivity. He strongly believes positivity is what helped him to get through his initial challenges.

–Life feels so much better when you help others and refrain from focusing on yourself. He believes his injury was intentional. As such, his purpose in life now is to help other people overcome their challenges.

–Don’t run from adversity. LeGrand, a quadriplegic, is determined and believes he will walk again someday. He wants to prove the doctors wrong and return to the football field “to finish that last play.”

–Success is “the feeling you get when you know you did everything you could to do your very best.”

At one poignant point during the presentation, LeGrand became parched and needed assistance from his mom to quench his thirst. Her holding the water bottle while he took several sips from it served as a vivid demonstration of his physical limitations.

As impressive as LeGrand was, the Riverview students were equally so. They were attentive throughout and asked compelling questions. Some wanted to know who inspired him. Others were curious about what motivated him. One girl asked how he was able to attend classes to complete his college studies. LeGrand graduated from Rutgers with a bachelor’s degree in labor relations.

“Someone took notes for me. I Skyped my courses and used Dragon NaturallySpeaking speech recognition software to write my papers and take exams,” LeGrand explained.

The presentation culminated with group photos with LeGrand. Students, teachers and administrators got in on the act.

“Eric speaks at a lot of schools and companies,” his mom shared. He welcomes the opportunity to do more since motivational speaking is his career now.

TAPintoDenville.net is a member of the New Jersey Press Association and is a hyperlocal news site that serves residents, organizations and business owners of Denville, New Jersey.

Long after his accident, Sam Schmidt takes the wheel again thanks...