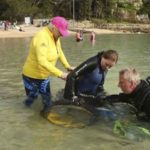 Ashlee Florrimell is a self-proclaimed “water baby” so, despite being a paraplegic, it was a natural progression to start scuba diving and “exploring the bottom of the ocean”.

“I was worried it was going to be difficult and mentally challenging, but surprisingly it all came naturally,” the mother-of-two said at Shelly Beach after an 8m dive.

“It’s really freeing, exploring something totally different to what you would normally see in day-to-day life.”

Ms Florrimell was one of four participants of the eight-day RAIDaptive scuba diving course for people with paraplegia or quadriplegia, hosted by Sargood on Collaroy, which offers specialist accommodation for people with spinal cord injury, and run by Snorkel and Dive Safari Swansea.

Sargood hosted Australia’s first course last October, and after its remarkable success, decided to continue offering it to guests.

Program manager Sebastian van Veenendaal said it did not want to just provide guests one-off recreational experiences, but courses that equipped them with meaningful skills and knowledge.

Participants covered the theory before spending three days at a pool learning how to assemble the equipment and manage equipment failures and three days at Shelly Beach’s famed Cabbage Tree Bay.

“By providing this course we can show that with a bit of planning and support, activities like scuba are possible,” Mr van Veenendaal said.

Sargood on Collaroy is operated by Royal Rehab, a not-for-profit provider of rehabilitation and disability services, and is the first of its kind in Australia.

It offers a range of activities, including golf, ceramics and whale watching, while providing support through specialist spinal trained therapists.

Bob Staddon, a former Australian Navy able seaman who snapped his neck at a water park and became a quadriplegic 40 years ago, was at Shelly Beach.

After winning three Paralympic bronze medals for swimming, he learned how to dive and has since logged 1200 dives, becoming Australia’s first quadriplegic certified master diver.

“You’re putting gear on their back and further limiting their mobility, and suddenly under water they think ‘oh, I can swim, I’m mobile, I’ve got more freedom, I’m weightless,’ and often it will also reduce pain,” he said. “It’s also a great way to exercise without realising you’re doing something physical.”

Instructor Shannon Carlson said even though they were using a course designed for people with disability, they had to be creative to overcome problems.

“A rescue skill they need is to be able to tow their buddy if they’re too tired but they can’t do it the way we teach it, they can’t kick,” she said.

“We told them the objective and we figured out the tower could lie on their back and swim with their hands while the tired diver holds onto the tower’s ankles, and it was incredible, we had never thought of that.”

Ms Florrimell, who sustained her injury in a car accident when she was two, said she wanted to follow in Mr Staddon’s footsteps and become Australia’s first female paraplegic master diver.