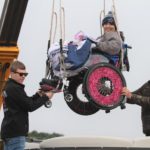 CHAMBERLAIN, South Dakota—As a crane operator lifted Kristina Allen into a boat Friday morning in Chamberlain, the parapalegic veteran set sail for her second day of fishing on the Missouri River.

Allen was one of 41 veterans who had the opportunity to cast a line in the river and spend two days fishing, thanks to a group of volunteer fishermen who provided their boats, poles and tackle. The 16th annual fishing trip is coordinated through Paralyzed Veterans of America, a national organization that provides support services for military veterans who suffered a spinal cord injury or dysfunction.

With Memorial Day nearing, the group of South Dakota outdoorsmen used the fishing trip as another way to pay homage to those who served in the nation’s armed forces.

“It’s just moving to see the joy these veterans have when they get out on the water and fish,” said Bill Curry, a Sioux Falls native who founded the event. “They served our country, and this is just one way that I’ve been able to help give back and honor their service.”

Curry has coordinated the fishing trip for the past 16 years and watched the event grow ever since. What started off with six boats at the first annual fishing trip grew to 46 for this year’s event.

Each fishing boat is accompanied by a captain, who is typically the owner of the boat. From netting fish to baiting hooks for the veterans, Curry said the volunteer captains of the boats assist when needed.

While a majority of the veterans taking part in the fishing trip are wheelchair users, some aren’t handicapped. Curry has been grateful for the fishermen volunteers over the years and said they’re exceptional in accommodating their boats for each unique injury the veterans may have.

“We all come from different walks of life, but the one thing that connects many of us South Dakotans is fishing and the outdoors,” Curry said. “And that is the medium that brings these veterans and fishermen together for this event. But this doesn’t happen without the volunteers.”

Mitchell natives Kent Liddeke and Dave Hoffman were among the fishermen who provided a boat and served as co-captains for an Air Force veteran.

For the past six years, Liddeke has been trekking to Chamberlain to provide veterans a memorable fishing trip with the help of his angling expertise.

“They’ve went through hardships that we’ll never know, and it’s a moving experience to help the veterans and watch them catch some fish,” Liddeke said while he organized his tackle box for the veteran on board his boat. “With how divided the country is lately, this unites all of us for two days.”

Retired Air Force pilot Norwood Baybridge was the veteran aboard Liddeke and Hoffman’s boat. Although he’s never been fishing on the Missouri River, Norwood wasted no time on the water and caught 21 walleye during the first day of the fishing trip.

“Growing up in Sioux Falls, I’ve heard a lot about fishing for walleye in Chamberlain, but I never had the chance to get out here and fish,” Baybridge said. “It’s been amazing out here … It’s like the Triple Crown of walleye fishing.”

Baybridge served in the Air Force from 1970 to 1974 as a crash rescue fighter pilot and said he loved how the event brought veterans from all branches of military together. The Thursday, Friday event also includes a communal breakfast for the veterans.

“This event gives us veterans an opportunity to not only fish, but to come together in comradeship,” Baybridge said. “And who doesn’t love to fish? especially for walleye.”

As an avid fisherman, co-captain Hoffman said his favorite aspect of the event is seeing the joy and excitement the veterans have when they reel in a fish.

“A lot of these veterans have never had the opportunity to go fishing on a boat, and it’s an honor to give them that opportunity,” Hoffman said.

By Sam Fosness, The Daily Republic