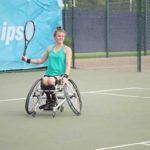 LAUREN Jones, 23, is a wheelchair tennis player from Worthing.

Lauren, who was number 25 in the world, tells how she made her sport dreams come true and is now living a life she loves, despite her disability.

“Holding the trophy above my head, I wanted to scream with happiness. Four years earlier I’d been left paralysed from the waist down, but that hadn’t stopped me from achieving my dream of becoming a pro sportswoman.

“As a child growing up in West Sussex, I was football mad, and by 13 was training with Brighton FC junior team. I felt so excited about my future.

“Everything went black, and I was rushed to hospital for emergency surgery to realign my broken spine and insert metal rods.

“When I finally opened my eyes after the op, the look on my parents Susan and Michael’s faces told me something was seriously wrong, and the doctor explained I was paralysed from the waist down.

“I turned to my dad and asked if I’d ever play football again. Tearfully he said no, and it felt like my world was crumbling around me.

“I spent the next week in hospital knocked out on painkillers. I was barely conscious, but when I was, I was terrified. It felt like a nightmare I couldn’t wake up from.

“On June 22 surgeons collapsed both my lungs and inserted a metal cage around my spine for extra stability, plus chest drains to control the fluid in my lungs.

“Waking up in intensive care with the drains feeling like they were suffocating me, I felt a wave of panic. It was so scary and painful, all I could do was hold Dad’s hand and cry.

“Over six months, I learned how to get dressed, use the toilet and get around in my wheelchair. Though every movement hurt, I was determined to regain my independence. Some days it was hard to escape the grief of what my life used to be. I’d get angry thinking about the things I’d lost, like being able to kick a ball or run around. It was unbearable to know all that had been snatched away.

“I tried not to let bitterness consume me and focused on staying positive, taking part in the wheelchair sports sessions offered by the centre. While most patients went weekly, I was there every day.

“One of the sessions was with a Team GB Paralympic tennis coach, and despite never having played before I seemed to have a talent for it. I got so good that I was invited to join the GB Talent programme, and jumped at the chance.

“In January 2010, six months after the accident, I finally came home. My parents had adapted our house to make things easier, moving my bedroom to the ground floor. The council tried to put me in a special disability school, but I refused as I wanted to be with my friends.

“It was difficult, especially when people stared or I had to navigate my chair through busy corridors, but I loved being back.

“I was full of excitement when I finally started the talent programme in July 2011. It involved training three times a week, plus regular matches and tournaments. By January 2013 I’d been crowned the World Number 1 for juniors.

“Soon after, I was paired with Alfie Hewett (who was born with a congenital heart defect), now 21, to play doubles as he was also World Number 1 in the junior men’s category. That May, we competed in the World Team Cup, winning gold. Despite all I’d been through, I’d still managed to make it as a sportswoman, and felt so proud.

“At 18, I decided to quit college and turn professional, as Team GB had offered to support me financially. Six months later I was ranked number 25 in the world for senior players, which was an amazing achievement. Sadly, an arm injury meant I missed out on the 2016 Paralympics in Rio, but I’ve got my sights set on Japan 2020.

“I now live at the National Tennis Centre in London so I can train with a team of coaches. I don’t have much time for a social or love life.

“My last relationship ended after two and a half years last September, as we just lived too far away from each other, but I can’t wait to fall in love again. For now, I’m just happy that being disabled hasn’t stopped me from living a life I love. I’ll always feel so grateful that I never gave up on my dream to be an athlete.”