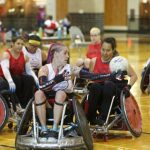 As Karah Behrend grabbed the rims of her wheelchair and thrusted her arms forward, she hurtled down the rugby court—zigzagging as a blur of bright purple hair through more than two dozen other women on wheels.

Behrend, 25, is among 27 female quadriplegic rugby athletes from the United States, Canada and France who are participating in the Women’s World Wheelchair Rugby Invitational Clinic. Hosted by the University of Houston, sponsored by the Halliburton Charitable Foundation and sanctioned by the U.S. Quad Rugby Association, the four-day training camp—which began Thursday—is the nation’s first all-female international wheelchair rugby event.

Events are free and open to the public. Weekend games, scheduled from 9 a.m. to 4 p.m. on Saturday, July 20 and Sunday, July 21, are at the UH Campus Recreation and Wellness Center, 4500 University Drive. 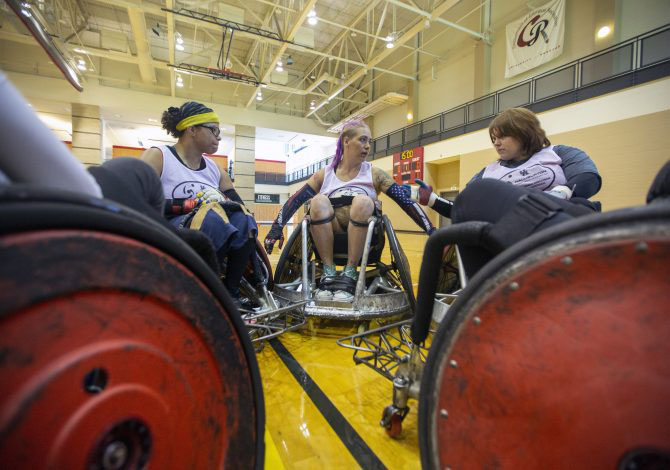 Wheelchair rugby was created in 1977 in Canada as an alternative to wheelchair basketball.

“The sport is traditionally co-ed,” said Michael Cottingham, Ph.D., director of the UH Adaptive Athletics program. “What is great about this event is that you’re bringing together women … at all the participatory levels. There are elite former national team athletes on the team to the developmental-level athletes where women can train with other women … in a way that they’re learning with other women and competing with other women.”

“Oftentimes, disability is seen as a form of fragility,” said Cottingham, who sustained a spinal cord injury after an IV malfunctioned and caused an air embolism into his spinal cord when he was less than a day old. “The beautiful thing about wheelchair rugby is it shows both participants and the spectators that these people are not fragile. They can crash into each other. They are not going to get injured. They’re going to play physical sports. They’re going to play hard. It’s fun and it’s healthy, and they’re not unlike people without disabilities.” 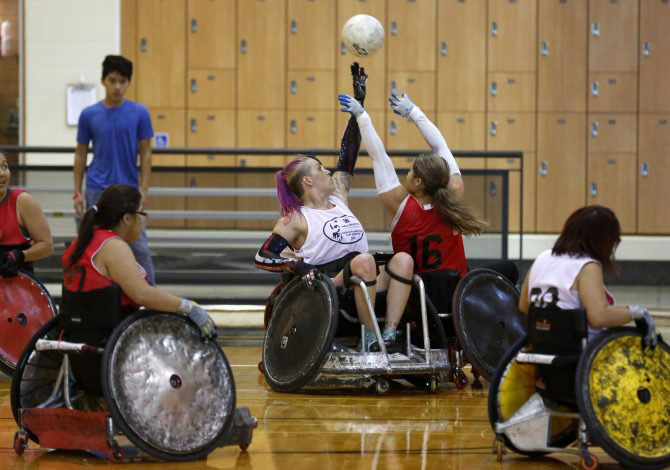 A force of nature

As a retired senior airman in the Air Force, Behrend was trained for resilience in the face of adversity.

In 2015, Behrend underwent a bunionectomy, but complications left her with reflex sympathetic dystrophy syndrome (RSD) in her right leg. RSD is a type of complex regional pain syndrome. The rare condition is caused by damage to the central nervous system, which consists of the brain and spinal cord, and the peripheral nervous system, which is responsible for sending and receiving signals from the brain and spinal cord to the rest of the body.

She spent two and a half years walking with a cane, but after a couple of car accidents and back surgeries, the RSD spread to her spinal cord and caused irreversible damage to her C7 and C8 vertebrae.

Behrend went from being ambulatory to being unable to use the lower body, a section of her core and some parts of her hands.

“Being angry and upset over something I couldn’t change wasn’t going to do anything. As soon as I figured that out, everything else fell into place,” she said. “I definitely still have my moments when things are frustrating. I get stuck in the dirt and I can’t move or I fall out of my chair. We all have these ups and downs, but really learning that I couldn’t control it was the key to my recovery.” 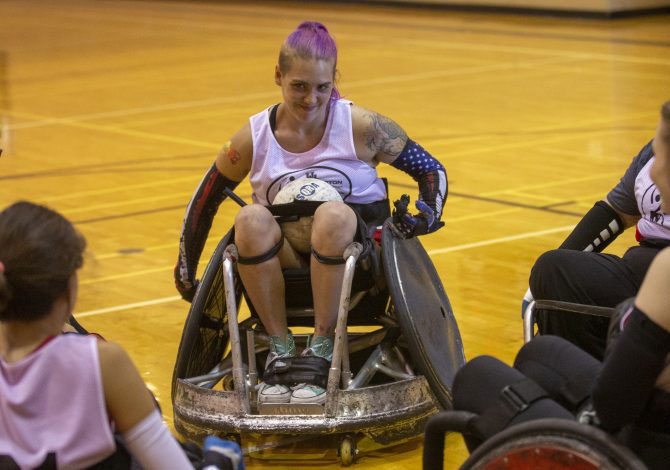 Behrend retired from the Air Force in 2018 after serving for more than six years, but she soldiers on as a champion and advocate for women’s adaptive sports organizations including the Air Force Wounded Warrior program.

“We really try and bring the message the military taught us of integrity first, service before self and excellence in all we do,” she said. “We try to show the community that once you’re done serving, you’re not done serving. It’s a lifelong commitment. That’s what we want to do for the community.”

Since retiring, Behrend now lives in Houston and plays for the Illinois-based Oscar Mike Militia. The team was founded by the Oscar Mike Foundation in 2011 by quadrapalegic Marine Corps veteran Noah Currier who aimed to provide the funds, facilities and opportunity to get injured and disabled veterans “on the move,” which is what Oscar Mike stands for in military jargon.

“It is honestly the coolest thing in the world to get on a court with four other women who have overcome everything that they have been told they can’t do,” Behrend added. “To be a part of something that’s so purely feminine but still so masculine at the same time, it’s kind of like a takeover. I really love it.” 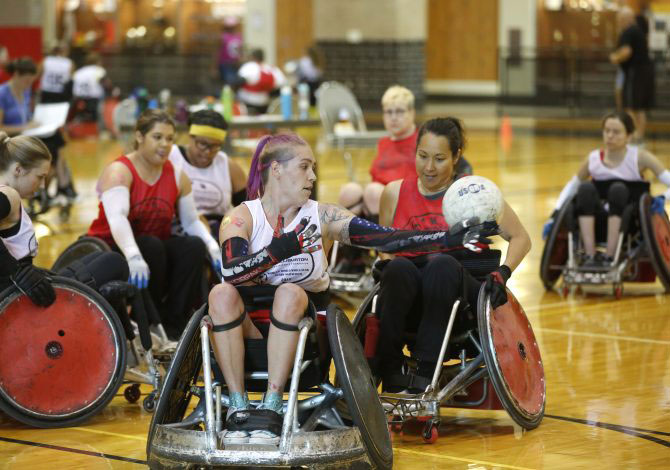 Wheelchair rugby players are given a physiological classification based on their functional mobility range: .5 points, 1 point, 1.5 points, 2.0 points, 2.5 points, 3.0 points and 3.5 points, with 0.5 being the least functional ability and 3.5 being the greatest. Each team consists of four players with a total of eight points of disability. The classifications are the same for men and women, but the maximum increases by .5 points for each female player.

The sport creates a unique place for women to participate, Cottingham said, but the hyper-masculine environment within a very hyper-masculine sport can be perceived too much as a “boys club.” Because spinal cord injury survivors are predominantly male—as are approximately 80 percent of new spinal cord injury patients—it’s common for teams to only have one female player.

Cottingham said that people with disabilities feel an extreme loss of agency, but the all-female sport helps disabled women support one another.