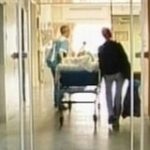 The first breathing pacemaker of its kind that regulates the pace of respiration in victims of spinal cord damage has been implanted in Israel.

Yedidya Knopf, a 22-year-old resident of Jerusalem’s Alyn Rehabilitation Hospital who was seriously injured in a road accident nine years ago, was operated on a month ago at Hadassah University Medical Center in Jerusalem’s Ein Kerem. On Wednesday, the device was turned on for the first time, and Knopf is breathing well without being hooked up to a respirator.

The operation was guided by Dr. Mark Ginsburg of Columbia University Medical Center in New York. He has so far implanted 60 of this type of “artificial diaphragm,” which can replace a respirator. Ginsburg gave a lecture on the innovative procedure at Alyn Hospital on Thursday. The operation was performed by a team headed by Dr. Uzi Yizhar.

Knopf has been paralyzed from the neck down since his road accident, which caused serious damage to his spinal cord. Since then, he has been attached to a respirator to keep him breathing, similarly to that of the late Christopher Reeve (“Superman”) who suffered the same damage when he fell from a horse in 1995.

The breathing respirator sends an electrical signal to the respiratory muscles of the diaphragm under the lungs and enables the patient to be weaned from the respirator. The device’s $30,000 cost was funded by Knopf’s insurer, Kupat Holim Meuhedet.

Dr. Eliezer Be’eri, head of Alyn’s respiratory rehabilitation unit, said that the implant brings hope to the patient and can greatly improve the quality of life of many people attached to a respiratory to keep breathing. “This is an important breakthrough that gives hope to spinal cord victims,” he said.