Dear Everybody, it’s time to address disability stigma in the media 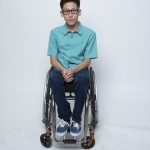 Growing up with a disability was never an issue for me.

In fact, I grew up just like any other kid I knew. I was born with a spinal cord injury causing partial paralysis in my legs, but I was fortunate to have been raised by a family who taught me how to love myself and be who I am.

However, growing up in a digital world, I realized that what I know about living with a disability in real life is not being accurately represented in the media, if represented at all.

According to a recent survey of Canadians by Leger, 60 per cent cannot recall seeing any representation of disability in advertisement in the past 12 months. And according to recent studies, only 2.7 per cent of characters in the 100 highest-earning movies of 2016 had a disability.

As a creative teenager who loves the arts, especially acting and musical theatre, these numbers are quite absurd and disappointing. Based on my experience with casting calls, unfortunately, they’re very specific.

Unless they’re looking for a teenage boy in a wheelchair, I won’t get sent to those auditions. I was hurt by this because it should really be about the actor’s skill and how well they can embody their character.

In the media, people with disabilities are often portrayed as sick, weak, alone or suffering. If we did quite literally anything that isn’t moping around feeling sorry for ourselves, we are praised for “overcoming” and “beating” our disabilities.

I see it as just living our lives, doing things we love to do.

This constant false representation, or lack thereof, of people with disabilities in the media has created a stigma that we need to fight, and Holland Bloorview Kids Rehabilitation Hospital is doing just that.

For the third year in a row, the hospital launched its Dear Everybody campaign, a national campaign designed to challenge and help end stigma toward kids and youth with disabilities.

This year, the campaign focuses on building a more inclusive and realistic media landscape — one that includes people with disabilities not because they’re inspiring, but because that’s the makeup of our society.

With 22 per cent of Canadians living with disability, we are not doing a great job with representing this diversity in mainstream media.

Everybody needs to see the depth of a character outside of their disability. I’m not socially affected by my disability, and I think more roles and opportunities need to be created in the media where disability isn’t just the sad backstory.

It’s time to include disability in the picture!

Tai Young, 15, is a Holland Bloorview ambassador and spokesperson for its Dear Everybody anti-stigma campaign.

The secret of his success