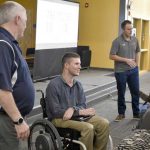 Norton, paralyzed from football, tells crowd there is hope

While Chris Norton was being flown in a helicopter after suffering a severe spinal cord injury in football, he believed he was going to die.

“I was worried about my breathing,” Norton said Wednesday night to a crowd gathered in the Student Resource Center on the main campus of Iowa Central Community College.

Norton, an Altoona native and Bondurant-Farrar High School graduate, was injured in October 2010 while playing football for the Luther College Norse.

The injury happened while Norton was making a tackle on special teams in the third quarter of a game against Central College.

Norton was first taken to a local hospital before being airlifted to Mayo Clinic in Rochester, Minnesota.

Before getting into the helicopter, paramedics told Norton they could put a breathing tube down his throat to pump in oxygen.

But Norton said he was also told it could cause more damage to his neck.

“I declined it,” Norton said.

Once on the helicopter, though, Norton began to struggle.

“We get on the flight,” he said. “We take off and all I can think about is my breathing. Am I getting enough air? And it eventually gets to be too much. I need more air, otherwise I am not going to make it.”

“My eyes shoot open, I look over to the paramedics and I mouth to them, ‘help me, help me.’”

But Norton said the paramedics weren’t paying attention at the time.

“At this point I thought for sure I was going to die,” Norton said. “So I closed my eyes. I just visualized myself to breathe. I imagined the air coming into my lungs and breathing it back out. I just kept counting and counting. Eventually, I realized I was breathing. I am OK. I am not going to die. I am going to make it. I am making progress.”

Norton asked the crowd how he was able to go from a panic to a positive.

“From overwhelmed to optimistic in a matter of minutes?” he asked. “Because my physical ability to breathe on that helicopter never changed. So what did change?

Norton said, “When I first entered that helicopter, gasping for air was the evidence that led me to believe I would stop breathing and die. I actually convinced myself that my situation would only get worse. However, everything changed for me when I began to focus on the air I was getting instead of the air I wasn’t.”

He said sometimes it’s easy to focus on the things people don’t have, rather than what they do have.

“When we make negative predictions for ourselves, it’s typically because we are focused on the wrong things,” he said.

Norton continued, “Everything changed for me when I focused on the air I was getting than what I wasn’t. That experience in the helicopter taught me if we can change our perspective, we can change our reality. All we have to do is point out out the evidence of progress, and that we are OK, right here, right now.”

He added, “The only moment you can change and make a difference in is this one. Managing this moment will allow you to make that shift from panic to believing everything’s OK.”

The helicopter ride was just the beginning of a long road to recovery for Norton. But his persistence and belief that he could overcome, ultimately led him to accomplish something doctors said was highly unlikely.

Norton was given just a 3% chance of ever regaining movement below the neck.

In the years that followed, Norton not only gained back movement from below the neck, in May 2015, with the help of his wife, Norton was able to walk across the stage for his college graduation.

And he and his wife later walked down the aisle together when they married.

He has continued to recover some sensation and mobility throughout his body–including his hands, legs, feet and torso.

“There’s always hope,” Norton said. “You just have to keep going. I want people to find their own will and courage. We are stronger than what we think.”

In 2012, Norton and his family founded the SCI CAN Foundation, a 501(c)3 nonprofit organization to raise money for individuals with spinal cord injuries in Iowa and the Midwest. It hosts annual fundraising dinners and various functions throughout the year pay for grants to rehab facilities, hospitals and individuals. As of 2017, the SCI CAN Foundation has raised more than $600,000. https://chrisnorton.org/