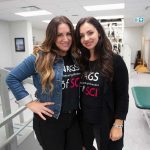 After Elena Pauly’s boyfriend sustained a spinal-cord injury in 2016, she turned to Google for guidance on how to navigate the challenges of her new role as both a romantic partner and caregiver.

Her search: “My boyfriend sustained a spinal cord injury. Now what?” didn’t turn up anything useful. It was a couple of weeks after her partner, Dan Duffy, was injured, and Pauly was feeling alone and isolated, with no one who understood the unique position she found herself in.

There were resources available to help Duffy adjust to life as a quadriplegic, but Pauly found nothing to ease her transition into their new life together.

After Duffy’s accident, the couple sold their home in Chilliwack and moved to Vancouver, where Duffy was in rehab. Pauly started to share images of their new life on Instagram using hashtags such as #quadriplegic and #Kitsilano, the neighbourhood where they live.

Her Instagram posts caught the attention of the mother of Brooke Pagé, whose partner is also a quadriplegic after sustaining a spinal-cord injury in a workplace accident, and who also lives in Kitsilano.

Pagé started following Pauly on the social-media platform and the two sent messages back and forth for a few months, before meeting up in person in mid-2017. Pagé understood Pauly’s feelings of isolation because she was experiencing similar emotions.

Their partners’ families and friends were sources of support, but they couldn’t understand what the women were experiencing, and neither could their own friends, whose confusion made Pagé and Pauly feel guilty when they had to cancel plans to care for their partners.

“We have interesting schedules with partners that are quadriplegics, and I know my friends, they never really understood,” Pagé said. “[Elena] always understood when I had to run off.”

The two bonded over their shared experiences as caregivers and lovers, happy to have finally found someone who understood their role.

“We have to wake up in the night with the [catheterizing] and all the medical needs and the temperature issues. And, you know, we’re the ones that have that unique dynamic,” Page said. “She just got it.”

After finding support in each other, the two friends decided to grow their community so other women with partners who had sustained spinal-cord injuries could find support too. Pauly didn’t want another woman to do a Google search as she had done and come up empty.

They started Wives and Girlfriends of Spinal Cord Injury, or WAGS of SCI for short. It began as an Instagram account and in-person meetups around Vancouver. They have since expanded to a website, Facebook page and YouTube videos, where they provide resources for other women and openly discuss their daily challenges and celebrate other couples. Their private Facebook group gives more than 700 women a chance to connect with others around the world in similar situations.

“It feels kind of surreal, because we’re just two friends that saw there was a need for something,” Pauly said.

Pagé said not everyone is up to the challenge of staying in a relationship after a spinal-cord injury, and many couples split up. Their support group is meant to empower women to help each other.

“We created the group for the women who want to stay,” she said, adding she often jokes that she likes her husband better now than she did before his injury, because he has had to learn to be more vulnerable and communicative.

The support group now has 10 international ambassadors across the United States and one ambassador in South Africa. The women provide outreach and support to others in their area, and organize events and meet-ups to connect women.

The founders also run a forum for the Christopher and Dana Reeve Foundation, a charitable organization dedicated to curing spinal-cord injury by funding research.

Pauly and Pagé were in Victoria on Thursday hosting a talk at Neuromotion Physiotherapy and Rehabilitation. The private clinic serves people with neurological conditions, such as cerebral palsy, Multiple Sclerosis, Parkinson’s Disease and spinal cord injuries.

Hillary Acosta, a neurological physiotherapist and manager of the clinic, said they invited the women to give a presentation to clients and their partners to share their lived experiences as partners to people with spinal-cord injuries.

About 86,000 people in Canada are living with spinal-cord injuries, according to 2012 statistics from the Rick Hansen Foundation. Men between the ages of 20 to 29 are most commonly affected.

A couple of months ago, the women typed the same words into Google that Pauly had asked shortly after Duffy’s accident. Their website popped up.

“That was definitely a hurrah moment,” Pauly said. “Sometimes, we’ll actually read all of our messages and sit there and cry, like: ‘Oh my god, we brought these people together.’”

Follow Wives and Girlfriends of Spinal Cord Injury, or WAGS of SCI for short