She broke her back mountain biking. Now she’s a Yale New Haven nurse. 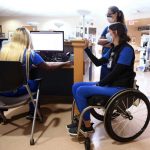 NEW HAVEN — Lindsey Runkel says there are no inappropriate questions to ask her.

There certainly are many questions to ask.

Like, how does a nurse, paralyzed from the chest down, do her job from a wheelchair? How does she stay so effervescently positive all the time? Why does she continue to go mountain biking after a crash in New Hampshire pinched her spinal cord, breaking two vertebrae?

And why did she run over her colleague’s foot?

“She’s wonderful,” said Tywana Mitchell, a business associate on West Pavilion 9, the kidney and liver transplant and liver disease unit at Yale New Haven Hospital. “She ran over my foot a couple times, but she’s all right with me.”

More seriously, Mitchell said Runkel, who started her job at the hospital in January, is “wonderful to work with.”

“She’s easy to talk to, she’s easygoing. She never says no,” Mitchell said.

It’s true Runkel doesn’t see any question as off-limits, because people do want to ask. “You can tell sometimes. You go into a room and they want to ask. The second they ask, I’m willing to offer up any information,” she said.

The short answer: “I’m in a wheelchair and I broke my back, but I’m doing really great and I’m able to do what I love. And then I throw it back on them.”

“I was mountain biking, which is one of my passions, and I was going off this rock ledge and I was just going a little too slow, and the front tire hit the ground first, which caused the bike to catapult me over the bars and onto my back.” She also did “a couple front flips” on the way down.

The fifth and sixth thoracic vertebrae in the upper back broke. “I never tore my spinal cord. I never cut it. There was no break in it. It just got pinched,” she said. “Spinal cords are sensitive. They don’t like to be touched.”

She still goes back to Highland Mountain, riding up the same mountain on the same bike, with a bucket seat and motor. She plans to take Smith’s 12-year-old son with her.

Smith, who was Runkel’s preceptor, the nurse whom she trained with, said, “We’ve not just become work buddies, but have made a friendship outside of here,” she said.

“I tell her every day I wanted to hire her in 10 minutes,” said Tami Chomicz, patient services manager. “My mind started going, ‘How am I going to do this?’ ” The hospital had never hired a nurse in a wheelchair before.

Runkel, 29 and a Westport native, graduated from the University of Connecticut’s Certificate Entry into Nursing Program with a bachelor’s degree in December 2019 and applied to Yale New Haven before she had taken her licensing exam. She had written on her application that she uses a wheelchair, but Chomicz didn’t know that when Runkel arrived for her interview.

“So I walk down the hall and this spunky young lady turns around and says, ‘Hi, I’m Lindsey!’ ” Chomicz said.

Runkel passed her interview with Chomicz and with a group of staff members without a problem.

“The questions are always fair,” Runkel said. “I’ve never once met with somebody and they asked something and I’m like, ‘How dare they think that?’ Because sometimes these questions cross my own mind.”

“Her answers were spot on,” Chomicz said. “She really was very eloquent in her answers. She asked great questions. And her spirit — bottom line, her spirit. Sometimes you just go away from the questions and go with your gut. And then I didn’t sleep for about two nights.” She worried: “Can we do this?”

Runkel spent an eight-hour shift shadowing her future co-workers and Chomicz ran the idea by senior staff, who said, “If you guys want it, do it, and we support you wholeheartedly,” Chomicz said. “Thank you for taking the leap.”

She was driving when Runkel called to tell her she’d take the job. “I kind of got teared up when she said yes,” she said. “Lindsey just needed someone to believe in her and give her a chance. Now she’s got wings.”

“People just are attracted to Lindsey,” Smith said. “She’s just a personable human being who happens to be in a wheelchair. … She wanted to be a bedside nurse. She wants to be part of that patient’s life and get into the nitty-gritty of nursing.”

Runkel at first wanted to be a veterinarian but was turned off when she realized she’d have to euthanize animals. “I wanted to be a nurse for a while,” she said. “After I got hurt it kicked in that this is something I really want to do. I realized when I was in the hospital how much of a difference any person caring for another person can make. … Just having somebody who’s supportive can really change their situation.”

There’s very little Runkel can’t do in her job. She’ll ask for help in steadying a patient who’s getting out of bed after surgery, but it’s more “from a safety standpoint” than an inability to do the task. There’s no reason to take the risk.

“I never have an issue asking, ‘Can you go do this for me?’ and if there’s something I can do for you I’ll do it,” she said.

The transplant unit was the perfect fit for Runkel, literally. The rooms are big enough so she can wheel in and out easily. “If there’s a code I feel like could go in and catapult myself onto the bed and get involved.”

The people on the transplant unit make a difference, too. “I think I got very lucky with the team I work with that the teamwork is so great, the friendships are so great,” she said.

There also have been no issues with patients. “We were nervous what patients were going to think and say,” Smith said. “No patients have ever (said), ‘How can she take care of me?’”

The COVID-19 pandemic brought new challenges, with not enough testing available at first. “I think you’d be hard-pressed to find any nurse that would say it was not scary,” Runkel said. She and Smith would go for coffee but the atrium would be empty.

“It was just really weird, almost a post-apocalyptic feeling. It was heavy,” she said.

“Lindsey didn’t miss a beat,” Chomicz said. “She had every excuse to say, ‘I’m tapping out for now. Call me when this calms down,’ and we certainly as an organization would have supported that, but she didn’t. Didn’t miss a beat.”

Chances are slim that Lindsey’s paralysis can be reversed. It’s probably caused by scar tissue on the spinal cord, she said. “Medical diagnosis-wise, no,” she says of the possibility of walking again. “But research is always going on. Every spinal cord injury is very different, so is there a chance I could be that one person? Maybe.”

While she has had her hard days, Runkel holds on to a positive attitude that’s infectious. “Very shortly after my injury, I realized I can cry about this or I can accept what’s happened and just move forward with it,” she said. “And I can keep trying to walk again, and that’s fine, but I can also still live my life and learn how to live the best life in a wheelchair.

“So that’s kind of been the mindset: If I walk again, great. But if I stay in the wheelchair for the rest of my life, things aren’t so bad. Things could have been so much worse, right? You’re forced to think that way, or you can go downhill really fast.”

Friends and family helped get her through. “I spent 60 days in the hospital, and I had 60 days’ worth of friends … and I think that made a huge difference attitude-wise,” Runkel said. “Because I never hit that depression that we were so worried about, and I think it was because I always had people around.”

Who knows what would have happened if she hadn’t gone heels over head over the handlebars? “I think that I landed in this job,” she said. “I don’t want to say that happened because I’m in a wheelchair, but I think that I always stop to think, where would I be if I hadn’t ended up in a wheelchair? Would my life have ended up on the same trajectory? … I just don’t know that I would have had the same drive.”

Others have asked her for advice on living with a wheelchair, including other potential nurses. “That’s my why. Aside from wanting to take care of people and having that passion for it, those sort of things keep me going, that I can impact not just the lives of my patients but all the people who are watching me do what I’m doing and who are impacted in ways that I don’t even know.”

Last Night on ‘Glee’: Can the ReWalk Cure Paralysis?