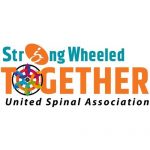 United Spinal Association today announced the launch of its #StrongWheeled Together campaign, which will run throughout 2022, highlighting the spinal cord injury and disorder (SCI/D) community’s contributions to American society and struggle for equality.

“#StrongWheeled Together is based on our vision of diversity and inclusion and fueled by people power: when our members and partners join forces, we are unstoppable,” said Vincenzo Piscopo, United Spinal President and CEO. “Together, we can achieve greater equality. We want all people with disabilities and United Spinal stakeholders to join us in amplifying this message of unity.”

#StrongWheeled Together will drive community engagement through educational and outreach initiatives around mental health and wellness, fitness and athletics, and emergency preparedness. The initiatives will be supported by the organization’s programs and marketing channels, as well as special events and tie-ins with its membership magazine New Mobility.

United Spinal aims to bring the professional and volunteer expertise of its staff and membership to a new audience drawn from the over 1 million Americans impacted by SCI/D.

The campaign will spotlight grassroots connections and personal stories that center on the journey from injury to rehabilitation and independence. In particular, #StrongWheeled Together will chronicle United Spinal member Adam Lane’s handcycling expedition across the United States, and the community support he receives on his trek.

United Spinal will also run a #StrongWheeled Showcase over the course of the year, highlighting previously untold stories about children, parents, couples, and veterans with SCI/D, as well as parents and caregivers of people with SCI/D and service dogs.

#StrongWheeled Together will culminate in a Member Awards Event in November 2022, a virtual gala recognizing leaders and emerging talents from the SCI/D community in the visual and performing arts, sports, entrepreneurship and innovation, and youth community impact.

About United Spinal Association
Formed in 1946 by paralyzed veterans, United Spinal is a national 501(c)(3) nonprofit membership organization dedicated to empowering people with spinal cord injuries and disorders (SCI/D), including veterans, to live successful and fulfilling lives. Membership is free and open to all individuals with SCI/D, with over 53,000 members across 49 chapters nationwide. Known for its revolutionary advocacy efforts, United Spinal played a significant role in writing the Americans with Disabilities Act, provided important contributions to the Fair Housing Amendments Act and the Air Carrier Access Act, and was instrumental in attaining sidewalk curb ramps and accessible public transportation in New York City, which created the standard accessibility model used in many United States cities.