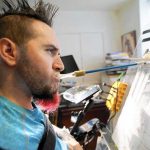 ALTIMORE — Stroke by stroke, the brush glides over canvas, creating scenes that few could do by hand. Except that this artist, Robert Florio, paints by mouth.

The quadriplegic Glen Burnie, Maryland, resident wields a brush attached to a mouthpiece, and paints by swiveling his head and neck — about the only parts of his body that will do as he asks.

It’s painstaking work for Florio, 40, who was injured as a teenager when he dived into a friend’s 4-foot deep swimming pool and hit his head on the bottom.

“I was a wild kid who didn’t really think things through,” he said.

The plunge damaged his spinal cord and rendered his limbs useless. Twenty-six years later, Florio has forged a career at his easel, painting everything from athletes to aliens.

After the accident, he said, “I felt, for six months, like I was in a cave. I thought, ‘Is there really no hope?’ I didn’t give up but it was, like, what do I do now? So I rewrote my life.”

A painter, he would be.

His likeness of Babe Ruth hangs in the slugger’s museum downtown. Florio has portrayed Ravens great Ray Lewis and Orioles Hall of Famer Cal Ripken Jr. He painted Jay Gibbons, gifting his work to the Orioles outfielder in a pregame presentation at Camden Yards in 2003. In turn, Gibbons handed Florio a bat inscribed: “Robert, Thank you for showing me the true meaning of life.”

Florio has done holiday scenes as well — one of two smiling snowmen in a wintry landscape, another of a lovable dachshund wearing a Santa cap.

“My energy level is higher at Christmas,” he said. “It’s a magical time.”

Florio has not lost hope of recovery. He has undergone stem cell therapies, among other treatments, and has tried meditation in efforts to walk again. He believes in extraterrestrials, in part because he thinks they may have healing powers greater than ours.

Meanwhile, he has cobbled together a life all his own, speaking to youth groups, earning a college degree and even learning to play the guitar. Florio has tried stand-up comedy in, as he says, a sit-down position. He has performed at several local clubs with an act that trolls the dark humor of his fate.

“When you go through hard times, you try to see the lighter side of it,” Florio said. “Once, at a comedy club, the headliner said to me, ‘Rob, that nurse you brought with you is really hot. How do I get a nurse like that?’

“I looked at him, then back at myself and said, ‘You gotta do this.’ He broke up laughing.”

Such banter helps keep Florio going. Ask why his arms are covered with tattoos.

Ask his thoughts on living with his parents at age 40:

“Jesus was 33 when he moved back in with his dad.”

In 2010, Florio self-published an autobiography, “Life! It Must Be A Comedy.” On the dust jacket, Ripken, his boyhood hero, wrote: “Robert is an amazing young guy who redefines what it means to overcome adversity. I consider myself lucky to have met him.”

Another book is in the offing, a fantasy tale of an otherworldly Santa Claus. Florio’s protagonist is a refugee from another planet who comes to Earth in a spaceship with his “warrior-protector,” a reindeer named Red. The storyline?

“Bad kids took over Santa’s old planet, so he came here,” said Florio, who illustrated the work. “We see the magic he can do, behind the scenes, to heal people and help them wake up and say, ‘It’s time to fix our broken planet.’”

A desire to help and to heal

There’s a curative theme to his efforts. Armed with an online degree from the Art Institute of Pittsburgh, Florio wants to create video games for the disabled.

“During rehab [at Mt. Washington Pediatric Hospital], I was taken to a playroom where kids were playing video games. I was told, ‘We have nothing adapted for you.’ My dream is to make a game for people who can’t use their hands. I want to help them heal.”

Art was an outlet long before calamity struck.

“It felt natural to me; I just gravitated toward it,” Florio said.

In first grade, he drew pictures of ninja turtles and sold them to classmates for 50 cents apiece.

“I felt like I’d done something great and should have been rewarded for it,” he said.

A member of Mouth & Foot Painting Artists, an international group, Florio has sold nearly 100 paintings of landscapes, sunsets, flowers and dogs, for as much as $100. His works, in watercolors, acrylics and oils, take up to 30 hours to complete in what can be an arduous process.

“Sometimes my neck and mouth get tired and I have to stop,” he said.

Pain is a given. Florio has had two spinal surgeries since the accident to alleviate distress. Most of his neck has been fused. Still, he stays close to his easel.

“Painting helps, though sometimes I just don’t have the energy or heart to do it,” he said. “When I do, the process of creation produces a very uplifting emotion.”

Sleep brings a respite from reality.

“Always, when I dream, I’m walking, often on a tropical beach,” Florio said. “Then I wake up and think, ‘Wow, that felt good.’”

Last year marked the 25th anniversary of his injury, a moment that Florio acknowledged.

“It was something that I celebrated, a milestone for me to overcome, a power push,” he said. “I look back now and think, man, I’m still alive.”

Alive, but not yet kicking.

“When I meditate, in an elevated state, sometimes I get tingling and shocks through my body,” he said. “I’m not imagining it.”

Regardless of the future, Florio is certain of one thing:

By: Mike Klingaman, The Baltimore Sun