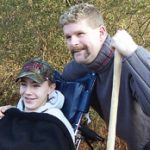 PELL CITY — As sunlight streamed across Mays Bend Road Friday morning, the group of people standing near lot 9 of the Woodland Hills subdivision to break ground could have been any group of developers.

The difference was simple to those who know John Paul Montgomery and his plight to overcome a spinal cord injury suffered in a football practice at Pell City High School late last year.

During a tackle, John Paul’s neck was broken and his spinal cord bruised. He was left paralyzed.

With a little effort and a mountain of donations, developers, bankers and local Tampa Bay Devil Rays pitcher Todd Jones, a new house will be built for John Paul and his family.

Jones and his wife led the project into the hands of local developers, who will make his vision for a handicap-accessible house for John Paul.

What led to Jones’ decision to help was simple.

“It was just me getting to know John Paul,” he said Friday. “I realized there are people who would do this project if they could. We are all called to do certain things on this earth. I am able to do it for him and we should do the things God leads us to do.”

The group broke ground on the 3,000-square-foot house with less fanfare, and more personal attention than most projects for a reason, said Dana Jacks, of Metro Bank.

“Todd has been so humbled by John Paul and wanted to help do something for him,” Jacks said. “It was inspired by Todd Jones, but it’s really not a Todd Jones project now.”

It’s not that Jones is any less committed, it’s just that others in Pell City got wind of a project they just could not refuse.

Contractor Bruce Ervin has donated all the excavation work. Alan Graham will pour the concrete footings. And building materials, including blocks, air conditioning and heating, sheet rock and plumbing labor have also been donated.

The plans were donated by Goodgame Welding and created by Cathy Shael there.

“People are coming to me and saying ‘I’d love to help!,'” Jacks said.

The project was to build a house where John Paul and his family can live in comfort, with amenities that will allow for his wheelchair and other needs, Jacks said.

John Paul’s mother, Tina, said after the groundbreaking, the house was a gift from God and those He has touched in the community to help her son.

“When I first found out about the house, I cried for about three weeks,” she said. “You just can’t believe people are so giving or so loving until something like this happens.”

And it all began with a visit in November, when Jones, a hero of John Paul’s visited him, Tina said.

“He stayed for about 45 minutes to an hour,” she said of the visit. “In the next few days (Todd) got busy on this project.”

Now, with the help of a few local angels, the project will come to fruition in a matter of months, Jacks said.

“It will take a little longer because of some of the features of the house,” Jacks said. “So, it’s not your typical home.”

In the meantime, John Paul’s physical limitations are all that have changed about him. During hunting season he bagged two deer with special equipment provided by Buckmasters and, Friday, he relaxed at home after the groundbreaking watching a deer hunting show on television with girlfriend Kayla Milam close by.

Not much of a talker, John Paul let his mom count the blessings that will eventually lead him, and the family, home after what has been an arduous journey.

And for his mom, the house is not charity, but a house to be built by God.

“I feel like God placed these people in our life for a reason,” she said. “The Lord has provided.”

In the meantime, John Paul continues therapy and there are two trips planned to St. Louis for visits with doctors who specialize in spinal cord injuries.

As Jones left Pell City for Tampa Bay Friday, he committed the coming baseball season to John Paul. In return, John Paul will continue his battle to walk again.

About Kyle Shelton
Kyle Shelton is a staff writer for The Daily Home.

WILL YOU STAND UP FOR THOSE WHO CAN’T?