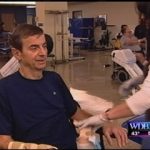 For decades, he treated patients in the Roanoke Valley as an orthopedic surgeon, but a bicycle accident flipped the script. In an instant, Dr. Bertram Spetzler was paralyzed, and he went from being a doctor to being a patient.

He is a quadriplegic, meaning he has paralysis in his arms and legs. Since late October, he has been undergoing therapy at the Shepherd Center in Atlanta. This is the same place News7 visited with Roanoke police officer Brian Lawrence when he was injured. It’s place of hope for many with spinal cord injuries.

“It’s much tougher being the patient,” says Spetzler.

“He had a broken spine in his neck, and as a result, injured his spinal cord, which is essential for movement in his arms and legs,” explains Spetzler’s doctor at the Shepherd Center, Dr. John Lin.

Spetzler doesn’t remember much about the accident, but he will never forget the neighbors who saved him.

“I remember waking up, looking at the sky with a bicycle over me,” says Spetzler. “Through the grace of God, my neighbors came by within an hour of that accident and got me out of a creek.”

Spetzler is already regaining some feeling in his fingers, arms and legs.

Watching him go through all of this has not been easy for Dr. Brian Torre. The two have worked together for 22 years.

Spetzler has been missed by many at Lewis-Gale Physicians.

“There is not an hour or two that goes by that someone is not asking about him,” says Torre.

“I’m grateful, and that love and outpouring helps me get through the rough spots,” says Spetzler.

His recovery will be a long process, but many are hopeful about his future.

“We hope as he recovers and gains some of his strength back, he’ll continue to come back and have a positive impact on the care we deliver at Lewis-Gale,” says Lewis-Gale Medical Center CEO Victor Giovanetti.

Spetzler is fighting to make that happen. His positive attitude and determination through it all are inspiring to many who know him.

Dr. Spetzler is expected home later this month. We’ve also learned his partner Dr. Torre will get to help with his rehab.