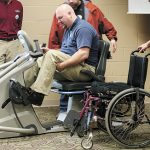 MEDINA — With a little help, Bill Phillips was able to get out of his wheelchair and start using a new cross-training exercise machine donated to the Medina Community Recreation Center in honor of a former high school classmate.

The apparatus, which looks like a seated version of an elliptical machine, can be used by people with spinal cord injuries.

The donation was in honor of David Lytle, a quadriplegic, whose spinal cord was damaged in a 1992 car accident. He was confined to a wheelchair until his death in 2007 at age 39.

In his honor, a group of Lytle’s former classmates from Buckeye High School established the David Lytle Memorial Foundation last year to help improve the lives of those with disabilities.

“All he wanted to do is help people,” said friend and former classmate Bryan Hilberg, who helped establish the organization.

Lytle graduated from Buckeye High School in 1986 and was a Litchfield Township resident.

Friends gathered at the recreation center Monday to dedicate the equipment, which has been in use since December.

Before the equipment demonstration, a short video was shown chronicling Lytle’s travels to Europe and skiing in British Columbia, along with his charitable efforts. 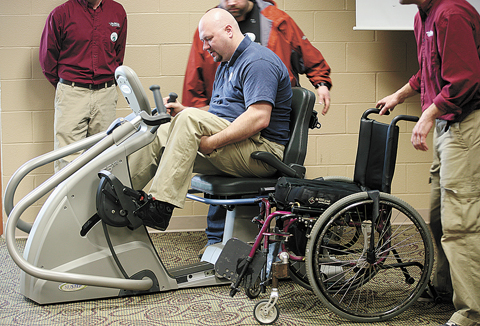 Bill Phillips, of Medina, tries out a new piece of equipment Monday at the Medina Community Recreation Center. The equipment was donated by the David Lytle Memorial Foundation in his honor. Although it can be used by the general public, it can also be used by those with spinal cord injuries.
(Shirley Ware | Staff Photographer)

While recovering from surgery in 2004, Lytle was watching the “Today” show and heard about a contest where the show would auction off an autograph book by everyone who appeared on the show in the last year and donate the proceeds to a charity chosen by the winner of the writing contest.

Lytle’s entry about former caretaker Karrie McMullen, who died from complications of lupus, won the contest. Lytle appeared on “Today” and the auction raised almost $300,000 for lupus research.

The exercise machine is the first major donation by the organization, which has raised nearly $50,000 so far, Kirby-Wilkins said.

Located in the front of the exercise area at the recreation center, the machine can be used by anyone, not just those with disabilities, Hilberg said.

The seat, armrests and arm controls are adjustable and can be powered using the arms, which makes it possible for someone with a spinal injury to exercise his or her legs.

In the future, Hilberg said the organization would like to raise money to construct ramps and other things that can improve the lives of those with spinal injuries.

On April 15, the organization will receive 15 percent of the proceeds from all sales at Applebee’s, 4115 Pearl Road, Medina Township, between 4 and 9 p.m.

Information about the David Lytle Memorial Foundation can be found at www.thedavidlytlememorialfoundation.org.