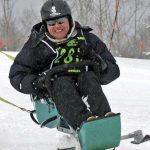 Shawn Ritchhart always thought of himself as kind of a loner. However, after a rodeo accident in 2004 paralyzed him, the 35-year-old is telling others with disabilities to not be a “hermit.”

“There’s no reason to be a hermit. Get out and do stuff. That’s the only way to start getting better,” said Ritchhart, a Navy and National Guard veteran.

Although Ritchhart has a C-4 spinal cord injury, he has regained certain functions – such as shoulder and arm movement – that he said can confuse college students working at the Chillicothe Veterans Affairs and Medical Center when they go to take their test.

“The occupational therapy students from Shawnee State, it can kind of mess them up on their tests because they see all the things I can do … The spinal cord is funny. Everyone is different … You never know what will come back. You have to keep working at it,” he said.

On Labor Day 2004, Ritchhart was riding in a rodeo, something he started while in the military, when he fell and landed wrong, breaking his neck. He was operated on at a civilian hospital in Pittsburgh, near where he had his accident, before being transferred to Louis Stokes Cleveland Veterans Affairs Medical Center.

Initially, Ritchhart was like many people with a C-4 spinal cord injury and could move only his head and neck, relegating him to a motorized chair he controlled with his chin. Today, he uses a motorized chair he operates with his hand, even with weakened wrist and fingers, and does strength training at the Chillicothe VA with a manual chair.

“I hope to get stronger so I can care for myself more …I just want to get back to doing things for myself and not have to rely on people,” Ritchhart said.

While in Cleveland, Ritchhart was visited by the Paralyzed Veterans of America who told him about annual summer games for paralyzed veterans as well as helping him fill out his paperwork. Since, he has participated in the games three times and between March 30 and April 3, Ritchhart went to his first National Disabled Veterans Winters

“You get to do stuff again. You’re not just sitting around,” he said of participating.

The Sports Clinic, co-sponsored by the Department of Veterans Affairs and the Disabled American Veterans, was the first time Ritchhart was able to ski since his accident.

He got to ski downhill, ski cross country and ride a snowmobile.

While there, he also heard about a nonprofit civilian group in Columbus, The Adaptive Adventure Sports Coalition (TAASC), which offers individuals with disabilities opportunities to participate in adventure activities such as kayaking, alpine skiing, water skiing, ice-skating, sailing and cycling.

Ritchhart plans to get involved with TAASC to stay more involved and also get back on a horse this summer with the aid of a new adaptive saddle he got for Christmas.

“My long-term goal is to get back on the tractors and start farming again,” he said.

He encourages others to get involved, too, both veterans and civilians.

“The games really help you. You get to talk to other people … older guys who have been injured longer, you can talk to them to see what they’ve done to get more independent. If you don’t get around people going through the same thing, you don’t learn the tricks … Even for people who aren’t veterans, there are programs out there to get involved,” he said.